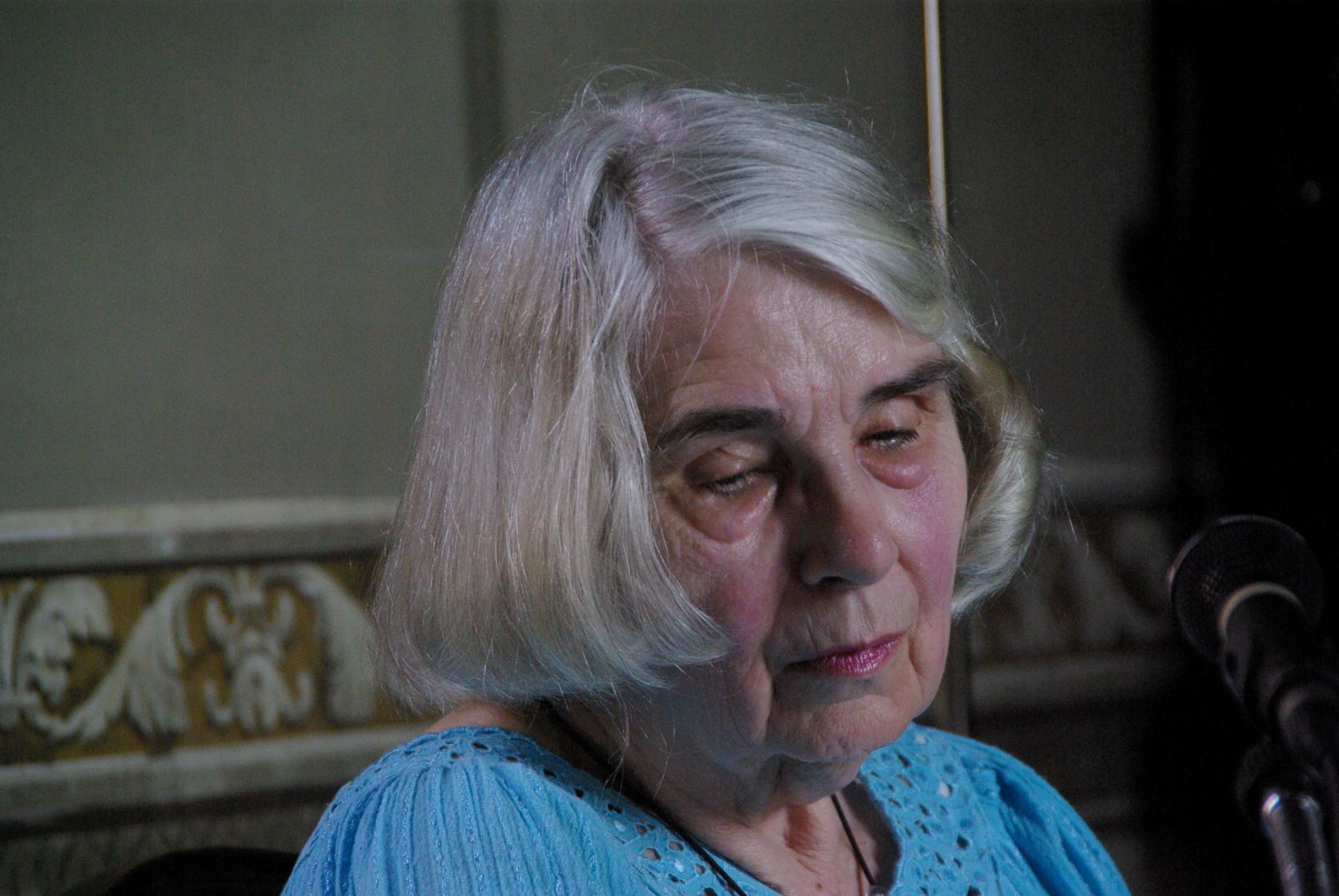 [The following obituary was sent to members of the Ezra Pound Society in October and is reprinted here along with the obituary by Bonnie L. Cook printed in The Philadelphia Inquirer on 16 October, and Archie Henderson's collation of Emily's work in Pound Studies, both in print and at many of the Ezra Pound International Conferences. My thanks to Jo Berryman, Mary de Rachewiltz, and Peggy Fox for the text below, to Walter Baumann for permission to reproduce several photos, and to Aya Yoshida for the photograph of Emily at the William Carlos Williams Society Conference in Rome in June 2019. – MB.]

Emily Mitchell Wallace, of Philadelphia and Chester County, died September 29, 2019, at Beaumont in Bryn Mawr, Pennsylvania. She was born in Springfield, Missouri on November 17, 1933; her parents were Prewitt Carlyle Evans and George Lafayette Mitchell Sr. For nearly 50 years, Dr. Wallace was married to prominent Philadelphia lawyer Gregory M. Harvey who died in 2018.

Dr. Wallace earned a Bachelor of Arts from Southwest Missouri State University (now Missouri State University) in 1958; a Master of Arts and a PhD from Bryn Mawr College in 1959 and 1965, respectively. Dr. Wallace was a writer, editor, educator, and scholar. She started teaching history and literature at The Curtis Institute of Music and The Shipley School, and became an assistant professor at both the University of Pennsylvania and Swarthmore College. Dr. Wallace returned to the Curtis Institute of Music as the chair of the English Department from 1976 to 1983, taking a brief interlude to serve as a leader in the Interdisciplinary Seminar at Yale University.

Dr. Wallace maintained a position as a research associate in the Center of Visual Culture at Bryn Mawr College, and served as an interdisciplinary research scholar in poetry and the visual arts at The Cooper Union for the Advancement of Science and Art. She served on both the sponsoring and advisory committees of the Rosenbach Museum & Library, the Marianne Moore Fund for Poetry at Bryn Mawr College, and the Friends of the Bryn Mawr College Library. She was a shareholder of The Library Company of Philadelphia, a member of Yale Library Associates at the Yale University Library, and served on the board of directors of The American Foundation and Bok Tower Gardens in Florida.

Throughout her academic career, Dr. Wallace organized conferences, wrote photographic essays, and created multimedia lectures for scholarly and academic audiences around the world. As recently as this past June, she spoke at the Università degli Studi Roma Tre in Rome. She was a guest editor for “PAIDEUMA, Special James Laughlin Volume,” (2002); and “W.C. Williams Review, Centennial Issue,” (1983). She was the prolific author of dozens of scholarly papers, including “Why Not Spirits? -The Universe is Alive, in Ezra Pound and China,” (2003); “Saffron Honey: A Love Song by William Carlos Williams,” The Idea and The Thing in Modernist American Poetry (2001); “Some Friends of Ezra Pound,” Yale Review (1986); “Athena’s Owls: The Education of Marianne Moore and Hilda Doolittle, Bryn Mawr ’09,” Poesis (1985); “Youthful Days and Costly Hours: The Education of Ol’ Ez and Billy Williams at Penn,” University of Pennsylvania Conference Papers (1983); and “A Bibliography of William Carlos Williams” (1969).

She enjoyed traveling and playing tennis with her husband at The Merion Cricket Club in Haverford, PA. Dr. Wallace is survived by her brother George Mitchell Jr. of Turners, Missouri, her sister Elizabeth Pace of Bolivar, Missouri, and two nieces and six nephews. 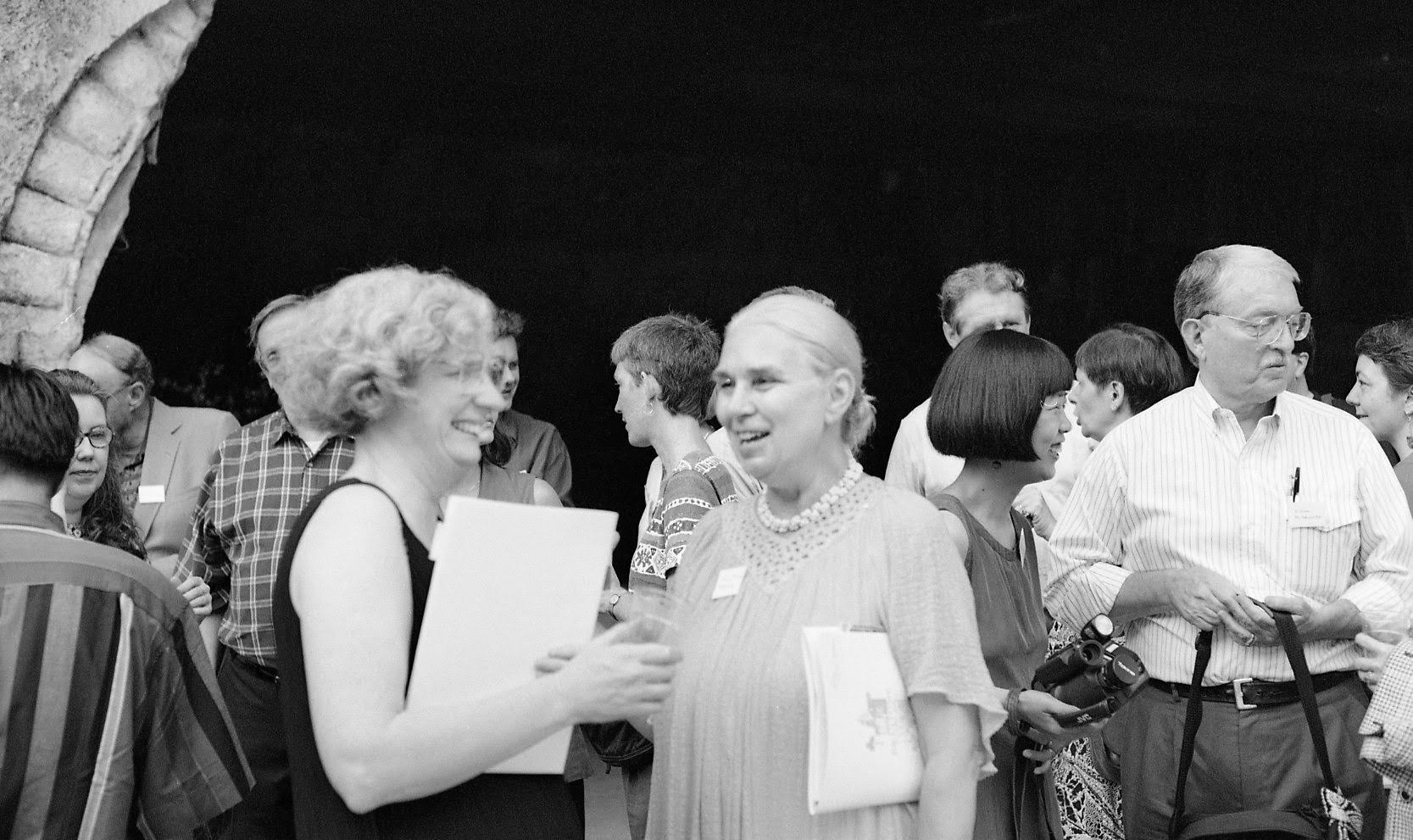 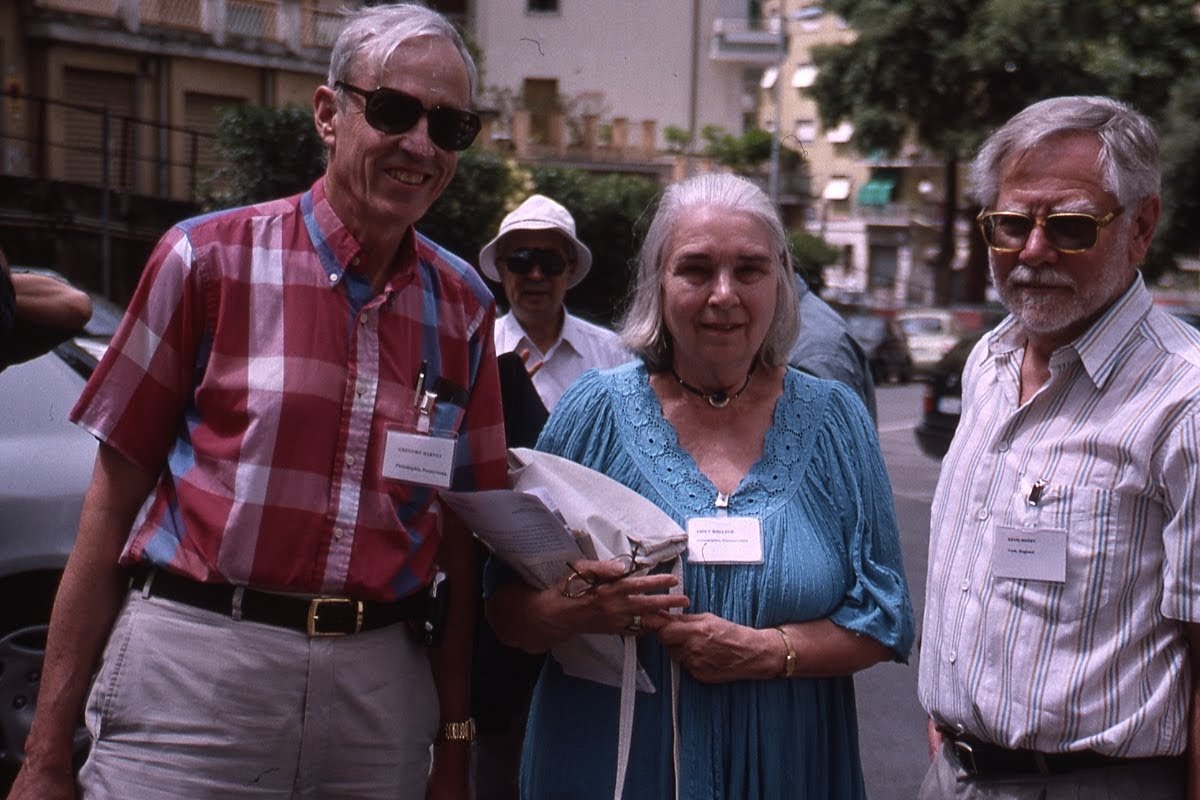 Emily and Gregory with David Moody 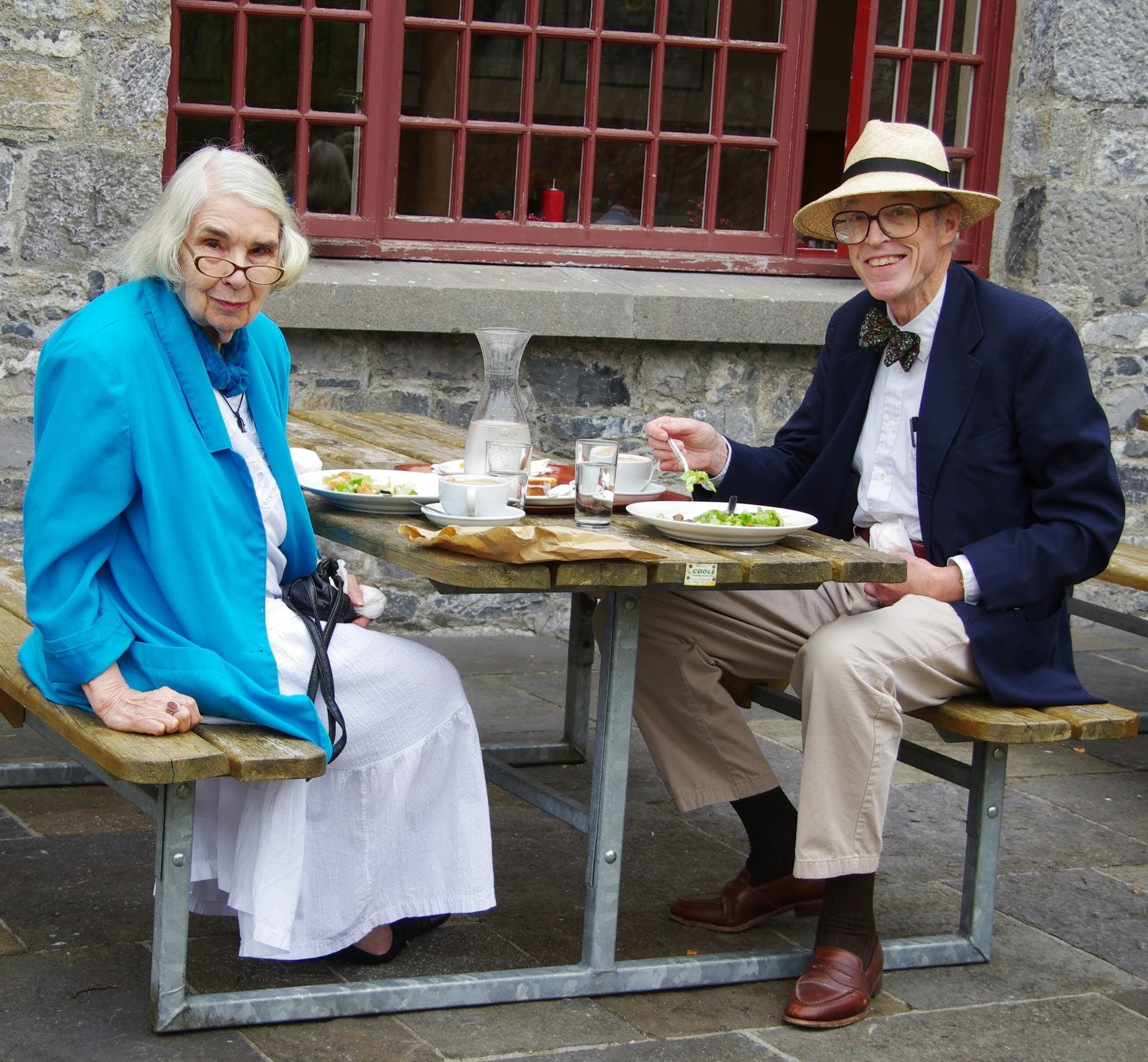 Time is an illusion; lunchtime doubly so. 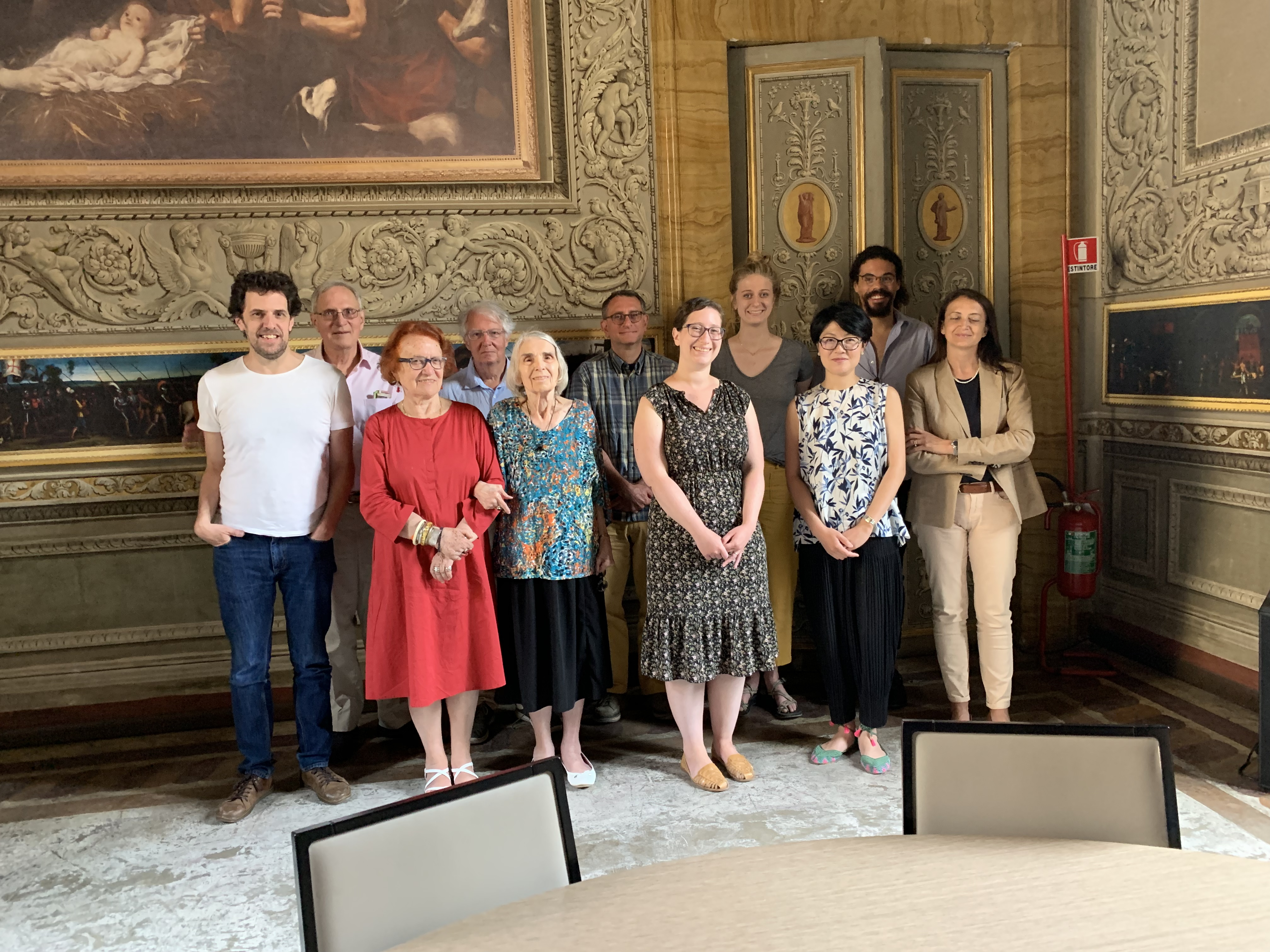 by Bonnie L. Cook, published in The Philadelphia Inquirer, 16 October 2019

Services will be Saturday, Nov. 9, for Emily Mitchell Wallace Harvey, 85, a scholar and an expert on the poets Ezra Pound and William Carlos Williams, who died Sept. 29 of cancer at Beaumont at Bryn Mawr.

Dr. Wallace, as she was known professionally, split her time between a home in Philadelphia and a farm in Chester County before moving to Beaumont, a senior community, in 2018.

She was an expert on Williams and Pound, who were associated with the modernist poetry movement of the late 19th and early 20th century in Europe and North America.

Dr. Wallace came to her profession at a time when traditional forms of literature and art were breaking apart and resurfacing as nontraditional verse and abstract art. She gave the new forms credence in her lectures and writings.

“She was a force of nature,” said Margaret Chew Barringer, her friend of 60 years. “She broke the rules of academia in all sorts of ways. She looked at the artists of the day breaking apart the images of the day, like Picasso and Kandinsky. Then she bushwhacked her way through the academia of the 20th century to make way for the thoughts of artists and poets.”

Dr. Wallace was married for 50 years to prominent Philadelphia lawyer Gregory M. Harvey, who shared her zest for Pound. They worked behind the scenes to celebrate the memory of the modernist poets.

In December 2006, for example, off-site from that year’s Modern Language Association Convention, they arranged a banquet at the Franklin Inn Club in Philadelphia to honor modernist poets with close ties to Pennsylvania, including Williams, Pound, Wallace Stevens and Marianne Moore.

Born in Springfield, Mo., Dr. Wallace was the daughter of Prewitt Carlyle Evans and George Lafayette Mitchell Sr. She grew up in Bolivar, Mo.

Dr. Wallace earned a bachelor’s degree from what is now Missouri State University in 1958. She completed a master’s degree in 1959 and a doctorate in 1965, both from Bryn Mawr College.

She returned to the Curtis Institute of Music as the chair of the English department from 1976 to 1983, taking a brief interlude to serve as a leader in the interdisciplinary seminar at Yale University.

Since 2001, Dr. Wallace had been a research associate in the Center for Visual Culture at Bryn Mawr College. She was a research scholar in poetry and the visual arts at the Cooper Union in New York.

She never really retired, said longtime family friend Marc J. Sonnenfeld, a Philadelphia lawyer. This past summer, she showed up at several professional meetings, despite failing health. “She was making the rounds,” Sonnenfeld said. “It was her way of saying good-bye.”

Throughout her academic career, Dr. Wallace organized conferences and created multimedia lectures for audiences worldwide. She had a steel-trap memory and was without any kind of pretense, Barringer said.

She was a prolific writer and edited scholarly journals. As recently as June, she gave a lecture at a university in Rome.

She was a guest editor for Paideuma, a journal of Modern and Contemporary Poetry and Poetics, for which she edited a centennial issue on William Carlos Williams in 1983.

She was a member of the Modern Language Association; Association of Literary Scholars, Critics, and Writers; Ezra Pound Society; and the William Carlos Williams Society.

She enjoyed traveling and playing tennis with her husband at the Merion Cricket Club in Haverford. He died in August 2018 of heart problems.

Dr. Wallace is survived by a brother, sister, six nephews, and two nieces.

Services will be at 1 p.m. Saturday, Nov. 9, at Christ Church, 20 N. American St., Philadelphia. Burial will be in the church graveyard next to her husband.

Compiled by Archie Henderson, with thanks to Hélène Aji and Walter Baumann.