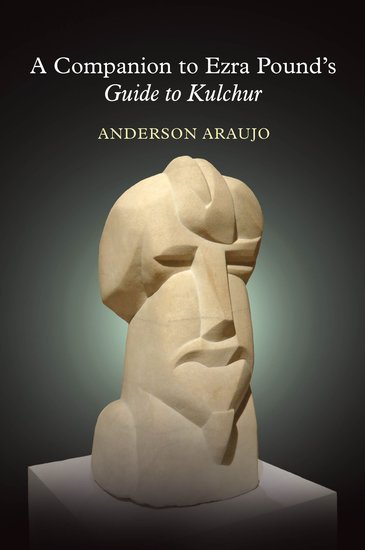 Published in 1938, Guide to Kulchur encapsulates Ezra Pound's chief concerns: his cultural, historiographic, philosophical, and epistemological theories; his aesthetics and poetics; and his economic and political thought. In its fifty-eight chapters and postscript, it constitutes an interdisciplinary and transhistorical cultural anthropology that exemplifies his slogan for the renovation of ancient wisdom for current use - " Make It New." Though wildly encyclopedic, allusive and recursive, Guide to Kulchur is inescapable in any serious study of Pound.

A Companion to Ezra Pound's Guide to Kulchur addresses the formidable interpretive challenges his most far-reaching prose tract presents to the reader. Providing page-by-page glosses on key terms and passages, the Companion also situates Pound's allusions and references in relation to other texts in his vast body of work, especially The Cantos. Striking a balance between rigorous scholarly standards and readerly accessibility, the bookis designed to meet the needs of the specialist while keeping the critical apparatus unobtrusive so as also to appeal to students and the general public. A long-needed resource, A Companion to Ezra Pound's Guide to Kulchur makes a lasting contribution to the study of one of the most influential and controversial literary figures of the twentieth century.

In March 1937, Pound crowed to Odon Por that he had a new book deal with Faber & Faber, “I gotta do …70,000 woids by September//sum of all human knowledge which is Ez his. ??? !!” This project became Guide to Kulchur, Pound’s most interesting prose work, typed out in just a couple of months. In the pithy introduction to his welcome Companion to Pound’s Kulchur, Anderson Araujo notes that “the vigorous pace of production is broadcast throughout the text: March 12,16,18, April 16, 22” 1937 (Araujo 4) as though the poet is pausing to take a quick gulp from his canteen as he fares forward. Finishing sometime in May, he was correcting proofs by January 1938. Araujo calls the Guide “the record of Pound’s most sustained effort”—besides the Cantos themselves, presumably—to explore the “borderlands between history, culture, and memory” (Araujo 2). For Pound, the whole point seems to have been to write out what he knew—or thought he knew—about the world off the top of his head. Kulchur is the residue, the “secretum,” of fifty years’ experience: a lifetime of wide and various reading, presenting among much else, his personal philosophy as derived from Master Kung and others, the whole of it “composed without any reference works other than those in his personal library…” (Araujo 4). Today we might think of it as a massive, even manic, “download” of Pound’s own heteroclite learning—less a guide to “Kulch,” “Kulchur” or Culture (all titles bruited for the work) than a sketch map of the poet’s own mind.

The Companion serves first as a “fact-checker,” locating the sources of Pound’s information and comparing them with their expression in the text. The amount of scholarly labor that Araujo has put into this project is prodigious, and the result is both fascinating and useful. He not only chases down Pound’s sources, but collates the poet’s remarks with other instances in The Cantos or elsewhere in Pound’s work, including the published correspondence. As well, Araujo “recovers all of [Faber editor T.S.] Eliot’s edits from the unexpurgated edition of Guide to Kulchur and annotates the excised passages” (Araujo 8), including the passage ripping Thomas Hardy’s sisters indicated by the notorious blank space on GK 286 (Araujo 302). Araujo also indicates where Pound himself cut passages before publication (see, for example, Araujo 188),

Furthermore, Araujo’s book is exceptionally well organized, with page numbers from the New Directions Guide to Kulchur running separately down the left margin, while the passage under scrutiny is put in boldface followed by Araujo’s comment. These in turn are supported by some 70 pages of footnotes at the back of the book (Araujo 391-458). Clemson UP is to be commended for allowing the project its full and necessary documentation, a responsibility too many presses balk at these days.

Obviously, Araujo’s Companion is a gift for students of GK but what is most attractive are the myriad paths for further study indicated by his annotations.

Here are just a few examples where Araujo’s Companion served a companionable, edifying end, teaching me something I’d previously read over as inconsequential and pricking my curiosity. In Chapter 31, “Canti,” subsection “Puritans,” on page 194 Pound takes up the epithet “stinking puritan.” I never would have guessed that it has a distinctly Southern provenance or I might have used it in arguments I like to make about the poet’s pro-Southern orientation. The term was directed by “American Creoles and Southerners’ against “their Northern foes” (Araujo 230) according to Araujo’s source (see Araujo 434n). Araujo does not speculate about where Pound might have picked up the phrase—in Claude Bowers’ The Tragic Era is my first thought—but his job as a companion is to stimulate further scholarship, not to interpret all the answers—that’s our job.

Another example: Pound opens GK with his “Digest of the Analects” a kind of ready-made already printed as Confucius: Digest of the Analects by Vanni Scheiwiller (Milan 1937). Here, Pound prints his translations of various remarks by Kung with comments. In the comment to a passage from “Analects XI” that Pound labels the “Make More Work Fallacy” Pound turns to one “Szetsun,” a philosopher I had always supposed to be a wise old ancient. Araujo teaches me that in fact Szetsun (Tuan Szetsun) is Pound’s contemporary and that the poet owned his Exposition of Confucian Cosmopolitanism (1936); it was probably on a nearby shelf when Pound was writing. Years later, in 1952, Pound mentioned the book to Achilles Fang (Araujo 34, Qian 119). Curiously, Tuan does not appear in the index of Carsun Chang’s (Zhang Junmai’s) two volume history of The Development of Neo-Confucian Thought that Zhang was writing when he and Pound were in frequent contact, nor is he mentioned in Feng Lan’s very helpful discussion of New (not Neo) Confucianism in Ezra Pound and Confucianism (UTP 2005). To what extent did Tuan contribute to what Lan calls Pound’s idiosyncratic “Confucian humanism” (Lan 188)? Could Tuan and Pound be considered New (but not Neo) Confucians?   A minor mystery there that someone should untangle!

Araujo’s Companion is part of a recent trend in Pound scholarship linking Pound closely to Fascism, as for example in Catherine Paul’s Fascist Directive (2016), another excellent Clemson UP offering. Araujo finds that “Pound’s mussolinismo, or star-struck fascination with Mussolini, fundamentally inflects the [Guide’s] many twists and turns”; and again “Pound wants to immerse us in his time and space, a historical moment deeply embedded in Italian Fascism” (Araujo 11, 4). If we see fascism generally, and Italian Fascism especially, as an attempt to overcome and renovate modernity, then Pound’s “Guide is quintessentially a fascist document” (11). But if GK is quintessentially Fascist, then Pound is too. But that’s not so; Pound is quintessentially Pound. His 1937 fascism is a pragmatic political affiliation to which he turned enthusiastically because he hoped to overcome the horrors of capitalist modes of production, especially finance capitalism. Araujo does not make a show of parading Pound’s Fascism or anti-Semitism in his book, so perhaps his point is that Pound thought of the book as an intervention into British politics, of a piece with the more overtly fascist propaganda he was somehow finding time to write for BUF outlets at exactly the same time as he rushed through his Guide (see Gallup and Feldman 44-58). Does that explain the strangely equivocal opening of GK? There, in the “Preface,” he begins by explaining, “In attacking a doctrine, a doxy, or a form of stupidity, it might be remembered that one isn’t of necessity attacking the man, or say ‘founder,’ to whom the doctrine is attributed or on whom it might be blamed” (GK 7). Is Pound on the attack or defending himself from attacks here? Which doxy, I wonder? Pound gives the overall impression that he is sounding the charge on a variety of cultural shibboleths, “committing himself” on as many points as possible (GK 7). But if so, who is the man? Does the book open with a preemptive defense of himself? Of Mussolini? If so, from who else but British and, latterly, American critics?

These indeed were unimpressed. Even Pound’s friends reviewed GK with regret. James Laughlin’s teacher Dudley Fitts found it a “compound of profundities and balderdash’ and complained about its sustained “proud, scolding pitch” pushing “Douglas and the Fascist State (EPCH 336). In Eliot’s own Criterion, Philip Mairet, a longtime New Age ally, wrote: “I fear that in a guide to culture, this is just pure bosh in an excited tone of voice.” Like Fitts, Mairet found a streak of anxiety through the book. He wondered just what Pound “is running away from?” (EPCH 334). “Culture” in the established respectable and anodyne sense perhaps? Araujo’s introduction makes the latter seem likely enough, but with GK’s opening page in front of us, he refrains: attack or defense? Which?

Certainly, Pound’s enthusiasm for Mussolini is constant, if not pervasive, in Guide to Kulchur. For instance, he ends his chapter on “Textbooks” with a newsflash, dateline “Italy a.d. 1937, anno XV, 52 million lire in fines on financial traitors, 5 million lire in gold seized by from a gang of financiers engaged in smuggling gold and bonds” (GK 143). Araujo doesn’t cite the actual news story which probably inspired Pound, but he does detail Mussolini’s Banking Reform Act of 1936 and he discusses the relation of the lire to the Gold Standard—it seems that Italy was one of the last countries to abandon it. He ends by steering us to Pound’s copy of Mussolini’s Doctrine of Fascism (1936), in which Pound underlined the following timely passage:

Democratic regimes may be described as those under which the people are, from time to time, deluded into the belief that they exercise sovereignty, while all the time real sovereignty resides in and is exercised by other and sometimes secretive forces. (Araujo 182)

Araujo avoids any temptation to tendentious commentary; instead, he lets it speak for itself.

Araujo’s project is impressive in its scope and thoroughness. I have only noticed one other place where he missed an opportunity to illuminate with a note. That is in GK, p. 156 where Pound expresses his strong disagreement with “some of the details of contemporary Italian and German views and proposed laws on conjugality” (GK 156). This must be a reference to the Nazi Nuremberg Laws of 1935, which forbade marriage between Aryans and Jews on the grounds of maintaining racial purity. The Italian “Manifesto della Razza,” influenced by Nazi eugenics, would not be passed until the summer of 1938. Pound would not read Mein Kampf or become a eugenic biological racist until April 1942, so this is an interesting moment: in mid-March 1937 Pound was distressed by Nazi laws and Italian talk of racial tests for marriages. He knew of the Nuremberg Laws and was disturbed their possible adoption in some form by the Fascist state. I’d have liked some help from the Companion on that.