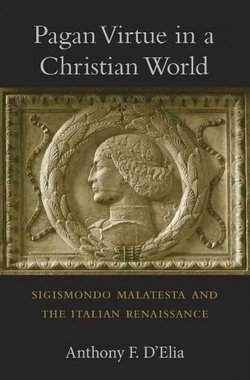 Pagan Virtue in a Christian World is the latest book by Anthony D’Elia, professor of history and classics at Queen’s University and author of A Sudden Terror: The Plot to Murder the Pope in Renaissance Rome (2009) and The Renaissance of Marriage in Fifteenth-Century Italy (2004). In this work D’Elia separates myth from reality regarding one of Pound’s most revered figures, Sigismondo Malatesta. In a nod to the poet, D’Elia observes how Pound “used Beltramelli, Hutton, and Yriarte to craft his Malatesta Cantos. Pound was inspired by the Tempio, its poetry in stone, unfinished state, and mythic status as a monument of Sigismondo’s love for Isotta, himself, and his revived paganism” (24). These same subjects constitute the center of D’Elia’s own interest in Sigismondo who served as the ruler of Rimini and as patron to painter Piero della Francesca, architect Leon Battista Alberti, sculptors Matteo de’ Pasti and Agostino di Duccio, poet Basinio Basini, and military engineer Roberto Valturio (27).

As D’Elia notes, “The Renaissance that Sigismondo created in Rimini was spectacular” (27). While previous treatments of Sigismondo have attempted to prove his innocence in the face of Pope Pius II’s condemnation of him as an atheist and pagan, D’Elia argues that Sigismondo encouraged his court humanists to invent an image of himself as a classical, pagan hero and that he is in fact guilty of much of what the pope damns him for. As D’Elia explains, “The image of Sigismondo in his court literature, as a Homeric hero, a devout pagan, a passionate lover of Isotta degli Atti, an accomplished dancer, and a student of music, philosophy, and classical poetry contrasts starkly with but also in some way mirrors the pope’s vilification of him. . .” (29).

D’Elia endeavors to prove his thesis through close readings of Malatesta literature concerning six points: court culture, Greek learning, military exploits, astrology and worship, and pagan sex and heroic virtue. In sum, “In Malatesta literature glory and ambition negate Christian humility; nudity, sexual desire, and pleasure reject chastity and modesty; the muscular athletic body replaces asceticism; the body is a vehicle to the divine, not a tomb for the soul; and fortune and astrological fate rule over Christian providence and free will. . .” (29). D’Elia covers these topics in a sequence almost identical to the progression of Pound’s Malatesta Cantos, tracing Sigismondo’s rise to power in his teens, his military accomplishments at his height, and his demise following his confrontation with papal forces (“The Malatesta Cantos”). In addition, D’Elia offers extensive portraits of the people that Pound’s mentions, including Basinio, Porcellio, Valturio, Isotta, and Polissena.

Regarding Basinio and Porcellio, for instance, D’Elia helps to clarify a scene recounted in Pound’s ninth Canto: “And one year Basinio went out into the courtyard / Where the lists were, and the palisades / had been set for the tourneys, / And he talked down the anti-Hellene . . .” (9/34). The “anti-Hellene” to which Pound refers is Porcellio (Pandone de’ Pandoni). D’Elia recounts the contest between Basinio and Porcellio concerning the merit of Greek literature (75-78). While Porcellio argues that a reverence for Greek will undermine Sigismondo’s Italian heritage, Basinio responds that one cannot understand Latin without Greek. “Sigismondo,” D’Elia reports, “ruled in favor of Greek” (78). Thus D’Elia offers us the conclusion of a debate Pound leaves open-ended. In addition, D’Elia remarks on the complexity of Valturio’s thoughts on poetry. Pound only offers, “And the King o’ Ragona, Alphonse le roy d’Aragon, / was the next nail in our coffin, / And all you can say is, anyway, / that he Sigismundo called a town council / And Valturio said ‘as well for a sheep as a lamb’” (9/35). According to D’Elia, “Roberto Valturio, who claimed to know Greek . . . calls Homer ‘the font and source of all divine subjects.’ He urges Sigismondo to ‘meditate on and read intensively Homer’s verse.’ Valturio actually disapproves of poetry as ‘weakening the nerves of virtue’ but makes an exception for epic, especially Homer” (79). D’Elia’s account, therefore, paints a picture of courtly life wherein even a military strategist is well-versed in the pagan literature of the ancients.

As for “Madame Isotta” (Pound 9/38), Sigismondo’s love interest so adored in Pound’s poetry, D’Elia views no other aspect of Sigismondo’s life as more definitively pagan than his affair with the much younger woman. Pound comments on Sigismondo’s Tempio Malatestiano, “et amava perdutamente Ixotta degli Atti . . . ‘and built a temple so full of pagan works” / i. e. Sigismund / and in the style “Past ruin’d Latium’ / The filigree hiding the gothic . . .” (9/41).

The romance of Sigismondo and Isotta celebrated in the poetry of Basinio and Porcellio was a public and political ideal. Isotta’s tomb, inscribed with the date of their adulterous affair, monumentalized this love and so was repeatedly celebrated by Malatesta poets and reviled by Sigismondo’s enemies. The image of Isotta was propagated and diffused in both the poetry and the medals cast to be given as courtly gifts; like the tomb, the medals were dated 1446, when Sigismondo’s wife, Polissena Sforza, was still very much alive. This erotic ideal of love has more in common with the pagan love poetry of antiquity than any Christian ideal of marriage, any medieval chivalric battle for unrequited love, Dante’s ennobling Beatrice, or Petrarch’s inspiring, emotionally vexing, yet unattained Laura. (222)

Though he perhaps refutes these lines from Pound, “And he began building the TEMPIO, / and Polixena, his second wife, died” (9/35), D’Elia contends that the love affair between Sigismondo and Isotta accords more with classical pagan notions of sex than with those found in chivalric romances.

Finally, D’Elia argues that Sigismondo retained his esteem for pagan virtue even after Pope Pius II’s damnation of him and the loss of most of his territory. Of course, Pound has nothing nice to say about Pius II: “So that in the end that pot-scraping little runt Andreas / Bensi, da Siena / Got up to spout out the bunkum / That that monstrous swollen, swelling s. o. b. / Papa Pio Secundo / Æneas Silvius Piccolomini / da Siena / Had told him to spout . . .” (10/44). In D’Elia’s view, Sigismondo held on to his reverence for antiquity to the end:

Sigismondo did what he had to do to survive against the papacy. But his attempted assassination of Paul II and his possible involvement in the conspiracy to murder the pope in 1468 show him defiant, uncontrite, and essentially unyielding. . . . Sigismondo also never abandoned his interest in . . . the sophisticated philosophical paganism of antiquity, so vividly demonstrated in his reverential reburial of Plethon’s corpse in the Tempio Malatestiano. (273)

Pound, too, references Neoplatonist Gemistus Plethon in his frontispiece to Guide to Kulchur: “Sigismundo brought back Gemisto’s coffin, and I leave the reader to decide whether without that incitement to curiosity even Herr Schulze wd. have dug up the illegible ms. in the Laurenziana or anyone noticed the latin pages bound in at the end of an almost unfindable edtn. of Xenophon.” According to D’Elia, the burial of Plethon at the Tempio Malatestiano constituted a final act of pagan defiance against the Christian papacy that ruined him.

It is doubtful that reading D’Elia’s book would have changed Pound’s composition of the Malatesta Cantos. Indeed, much of what Pound suggests D’Elia confirms, namely that Sigismondo performed his greatest deeds for both art and war, that he ushered forth a rebirth of pagan virtue and belief at the forefront of the Italian Renaissance, and that he served as a model for the man of action. Thus, Pagan Virtue in a Christian World serves as a welcome supplement to the resources found in Roxana Preda’s The Cantos Project. For Poundians, a rereading of the Malatesta Cantos in light of D’Elia’s superbly argued work does not change our view of the historical Sigismondo, but rather refines and deepens it. Sigismondo emerges as a ruler and patron paradoxically old-fashioned and avant-garde, a poet-warrior quite “out of key with his time” (Mauberley), a man much like Pound himself.