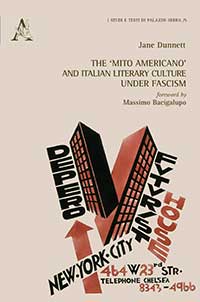 This is not a book about Ezra Pound. Indeed, Pound makes only the briefest of appearances in the text, and in a not entirely flattering light, mainly in reference to some of the attitudes towards American literature in the journalism of Carlo Linati, who appears to have taken his friend Ezra Pound's furious condemnation of American mass culture at face value. The absence of Ezra should, however, not dissuade Poundians from reading the book. It is a major study of the reaction of Italian writers, artists and audiences to America and its literature and culture, nor is it entirely bound by the Fascist period of its title on which it concentrates. Pre- and post-cursors to writers of the ventennio are cited as well as activities before the March on Rome in 1922 and after the removal of Mussolini by the Fascist council in July 1943 of writers working principally in that period. We have thus the context in which the American poet lived and worked during his major Italian years, a ventennio of his own which almost exactly coincided with the heyday of the Fascism.

What is clear from the start is that attitudes were not entirely what might be expected by those facilely imagining or opportunistically maintaining that Fascism and enthusiasm for things American were incompatible. On the contrary, the ‘American myth’ appears to have been a goad to or justification of some of the Fascist agenda – its futurism, its emphasis on youth and the new, its corporatist industrial and commercial aspirations, its pioneer fantasies (Africa as a wild west). Above all – and in association with an attribute often ascribed to Pound – there was its masculinism: eschewal of the effete, the decadent, the effeminate or over-refined. A perceived primitivism and exoticism in America – its ‘barbarism’ in a semi-positive sense – was held up in contrast to passé qualities in England and its culture, also to some extent to France, against which Italy and contemporary Italian culture sometimes felt, or was imagined as being seen as, inferior. America was an inspiration rather than a threat in ways that these older, closer European cultures could not be.

Fascination with America began to gather force with the emigration at the end of the 19th century. It was a land of gold and opportunity from which émigrés sent back fortunes and/or returned as rich men. Intelligent observers from the first spotted that between the myth and the reality fell a shadow. Yet the penury of Southern Italians communities on the American East Coast appears not to have damaged a positive “idea of America,” nor the prejudice in which they were held by Anglos and competing immigrant groups. The sticking-together of Italian-Americans was perceived as a virtue; the arrival of Mussolini on the world stage is said to have given, in its initial years, a new pride to them. Enthusiasts argued that the building of the “grattacieli” of Manhattan was owed in large part to Italian architects, engineers and laborers – indeed, that the America of a new century had been and was being helped to its pre-eminence worldwide by the Italian contribution to it.

In the farms and vineyards of California, in opera houses and cinemas, Italian-Americans were at the fore - so commentators taking the message home might proudly proclaim. Jane Dunnett details it all in five large chapters charting the progress of the “myth” via journalism, film, novel, translation and learned critique. She rehearses the careers and changing attitudes of Emilio Cecchi, Cesare Pavese and Elio Vittorini along with others, such as Luigi Barzini and Mario Praz. She views the impact of Hollywood on both literate and semi- or illiterate Italians. She shows how the native creative industries tried to measure up to and succeed in the manner of American counterparts. By the ‘30s, this progressed under the watch of the Ministry of Popular Culture, sometimes with censorship, often with a blind eye, even encouragement. Severity came with the war, but not complete. The publisher Bompiani was persuaded to remove Vittorini’s positive commentary from its anthology Americana and replace it with Cecchi’s more negative indications of “how to read.” But public hunger for things American and need for sales insured that the work was not suppressed altogether.

Outstanding in the epoch was the popularity of works by Jack London, which ticked boxes of social and racial aspiration and embodied an idea of the wild that appealed to a Zeitgeist in partial retreat from the civilities of pre-World War I. D’Annunzio had iterated a certain type of masculinism, but apart from Notturno his work retained association with the florid and arte elements of the fin-de-siècle; and as vogue for these mannerisms declined, hunger for bestsellers in translation like Gone with the Wind and Anthony Adverse advanced. Audience was expanding down the social scale. A market opened for the whimsy of Disney: Topolino (Mickey Mouse) acquired a made-in-Italy franchise, and his creator was granted an audience with Il Duce. The same was not offered to Chaplin, though his films had great following; his cohorts Douglas Fairbanks and Mary Pickford were, however, honored by the régime, about which they made flattering remarks.

A little more about the development of Italian film out of American fascinations might have been in order. We are told, for example, about translations of popular authors like James M. Cain, but not about the early film version of his novel The Postman Always Rings Twice in the young Luchino Visconti’s Ossessione. Much is made of Italian enthusiasm for the American cult of the frontier from Fenimore Cooper onwards, but not about how this married up with indigenous tales of Carbonari or Sicilian “men of honour” to give birth to the Spaghetti Western. These, however, are not major criticisms. Jane Dunnett died of an untimely cancer before being able to perfect her text, and in any case its stated principal focus is literary. What she shows above all is the great influence of the “American myth” on the style and substance of original work by writers like Pavese and Vittorini. Following their careers with care, she illuminates the pas de deux between love and distaste that such writers engaged in with a vast body of work from the New World. It is a deft job.

There is something more in this book to challenge Poundians, thrusting them into a linguistic realm akin to the ones he inhabited in Rapallo and Venice – i.e., the text is in effect in two languages. Dunnett writes in English but quotes in Italian, without translation, and quotation is vast – if one counts footnotes, half of the whole. A reading knowledge of Italian is required to absorb this best, and since the figures Dunnett discusses were adept readers of English, why should we not return the favor? They were refreshing their style for a new age in encounters with a language rejuvenated by the dialects of a “barbarous” country, and it is fascinating to see how their own prose develops. What Byron called “that soft bastard Latin” no longer bore the sweet tones of a Teresa Guiccioli when voiced by men vying for publication space in an era of squadristi. One of them ghost-wrote a biography of Italo Balbo. All of them knew that the erstwhile journalist leading the country fancied himself a literary man. “E' divertente,” said the Boss. But he too, and those in the Ministry for Popular Culture, had to be cognizant: the nation’s taste for a new world would outlive them.

Chapter I
The mito americano Revisited. Shifting Perspectives on an Italian Topos. 

In Search of a Bestseller. Italian Publishers and the American Novel

Importing Literature, 274 – From State Intervention to State Censorship, 281 – Publishers and Readers, 287 – The crisi del libro, 293 – Jack London’s Fortune under Fascism, 310 – Marketing Modernity: The Vogue for New American Novels, 317 – “I Romanzi della Palma”: Affordable Fiction for all the Family, 321 – “Successoni letterarî”: Antonio Adverse and Via col vento, 330 – Topolino: An Icon for Troubled Times, 343 – Negotiating (with) the Ministry of Popular Culture: The Case of Americana, 353.

Mediating the Myth. The ‘Discovery’ of American Literature by Italian Critics