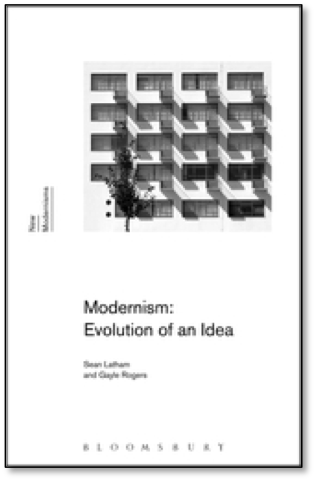 Sean Latham and Gayle Rogers’ recent monograph, Modernism: Evolution of an Idea, attempts to delineate the emergence and evolution of the term “modernism” over the course of the twentieth century. Their study does not attempt to conclusively define the term “modernism,” but rather focuses on the various definitions the term has accrued over its multitudinous deployments since it emerged and gained cultural capital. More important to Latham and Rogers is the construction of the critical term “modernism” in the context of cultural critique and the term’s reception. They begin by taking as axiomatic that “modernism” does not exist. That is to say, there is no way to define any singular tradition of “modernism” because that definitional effort inherently privileges particular texts at the expense of others. The act of creating an “ideal order,” as Eliot put it, depends not just on the inclusion of a fortunate set of “ideal” texts, but also the exclusion of the rest of the figurative archive works produced during the period labeled “modernist.” It is thus the work of the early part of the study to show just how the consolidation of the term “modernism” created a particular canon of texts, at the center of which the “high modernism” of Eliot, Pound, and Joyce was exemplary because of its aesthetic difficulty and supposed artistic autonomy. This early canon of “modernism” excluded female authors and female experiences; African American, anti-colonial, and queer authors, as well as many other non-literary artistic productions including film and radio for example were similarly excluded. The latter part of the study traces the emergence of these alternative traditions of modernism and the emergence of the New modernist Studies.

The study is broken up into four chapters. The first chapter, “The Emergence of Modernism” traces some of the earliest uses of the word, from a papal encyclical against “modernism” in 1907 to the powerful branding of the term in commercial advertisements. Latham and Rogers then explore how the term came to be associated with a particular tradition of difficult literary texts, of which T.S. Eliot’s The Waste Land and James Joyce’s Ulysses are the originators. The second chapter, “Consolidation,” demonstrates how the term “modernism” was increasingly associated with aesthetic difficulty even by conflicting and disparate thinkers, including those associated with Marxist, formalist, psychoanalytic, and New Critical circles. For example, Latham and Rogers demonstrate how Frederic Jameson’s radical way of reading “modernism” in The Political Unconscious depends on the same canon constructed by the New Critics, reinforcing its exclusionary nature. A further argument of this chapter is that this consolidation of modernism occurred alongside the increasing professionalization of literary criticism in academic settings exemplified by the aforementioned schools of critics. The third chapter, “Iron Filings,” traces attempts during the late twentieth century to identify alternate traditions of “modernism.” These critical interventions displaced the importance of the artwork’s autonomous nature and its aesthetic difficulty as the most important “modernist” qualities, allowing heretofore excluded traditions of feminist, anticolonial, and African American art, as well as art engaged in political and social issues other than Eliot’s or Joyce’s to gain the attention they deserved. The fourth chapter, “Networks,” explores the ways in which the New Modernist Studies emerged from the theoretical concerns of the seventies and eighties, which undid much of the canon formation of the early twentieth century and is still informing debates regarding Modernism today.

This is an ambitious project and Latham and Rogers succeed in convincingly tracing the evolution of the term “modernism” from a cultural buzzword to a consolidated, yet empty, signifier of a particular set of artistic conventions and works, which contained, like any taxonomic convention, paradoxes that eventually undermined its very existence. What is particularly interesting about the study is the early chapters, which demonstrate just how little many of the supposedly “high modernist” writers actually thought about the term “modernism.” It is true that Pound claimed that Eliot had made himself “modern” on his own, but the term was first used and circulated most extensively by the critics, especially the New Critics, responding to their work. Furthermore, Latham and Rogers hone in on an especially interesting paradox in the amalgamation of a “modernist” school of thought, which is the conflation of artists who saw themselves as participating in a tradition of art (Eliot and Pound) and those who sought to radically break free from it (the Futurists). These two schools of seemingly incompatible avant-garde thought were joined by the emphasis on autonomy and difficulty, which both schools of work shared. This conflation, though, as it has been mentioned before, also depended on the exclusion of multiple groups of artists, who were mainly not white men though integral to artistic production in the early twentieth century.

Latham and Rogers provide an admirable and clear outline of their arguments in their introduction and at the beginnings of each chapter, while also providing strong nuanced readings of their source materials. Another great strength of the text is that it provides an excellent introduction to many of the issues that have dominated debates around “modernism” over the course of its emergence, as well as a solid bibliography for those recently entering the field. While the analysis is not exhaustive, the text highlights and engages many points of contention that could be further explored. Accordingly, it would not be surprising to see this study on any modernist’s bookshelf or added to the syllabi (or at least the recommended reading) of upper level or graduate courses on “modernism.”