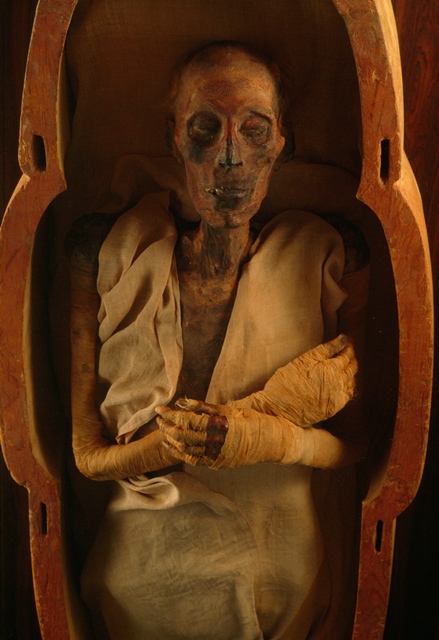 In 1974 Ramses II redhead mummy was flown to Paris

from Cairo for an examination as it had been

infested with a kind of fungus attacking his body.

Issued an Egyptian passport, that listed

his occupation as “King (deceased),”

the mummy was received at Le Bourget airport,

just outside Paris, with the full military honors

befitting a king. They then killed his fungus.

arthritis and poor circulation, just like the rest of us.

I wondered if when he was alive he had dreamt of flying,

and now actually was, after death over 3000 years

later. Oh, if he only knew what would he have thought?

For a while when I was a teenager I was

obsessed with him, thought his exposed face was

so well preserved. Now, I don’t quite

understand my fascination back then.

What did I see in him? But, then again,

this type of trans-world transgression,

or transportation does not occur very often.

Whatever happened to, “May he rest in peace?”

But then, why rest, fly the friendly skies! Be set free. 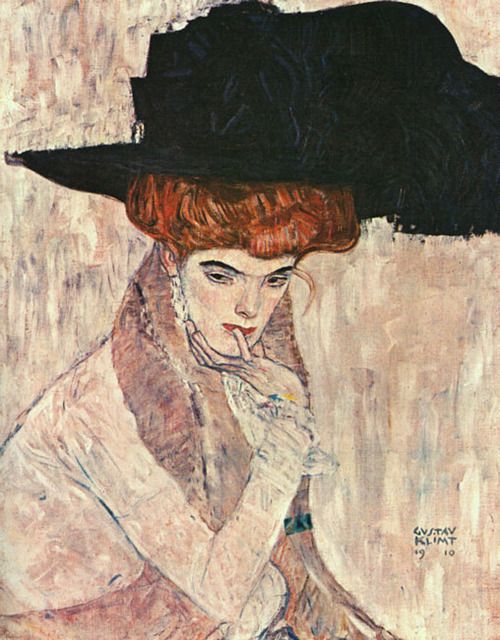 At first, from a distance, I thought she was smoking,

leaning on her palm, but instead I realized the young lady’s pinkie

was on her lips, applied with brick colored lipstick

just like her hair, curly, pulled up, yet not so tightly,

and falling down, a strand even coming out on the right.

Topping the orange red hair she has put on a huge

rimmed, black hat with feathers leaning to the right,

going off the painting. The hat draws us to her,

quite a contrast to her pale face, a beige scarf

and dress, even a mostly beige background.

Looking down, but with eyes turned to the left,

What had happened to this previously unknown Hungarian

redhead model, here in Vienna? How has her name survived even

though Klimt’s companion, Emilie, burned all his correspondence?

What had happened to her before the painter decided to

immortalize her? Where was she headed, decked out like this?

She seems to be in some kind of dilemma. Untypical pose

for Klimt, contemplating, this sophisticated lady

in a private situation, he almost a voyeur.

Author’s note: Both poems will appear in my newest collection of poems coming out in WordTech Editions, January 2017, called Incognito. Cincinnati: Imprint, 2017.