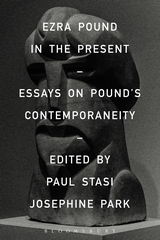 Was Ezra Pound the first theorist of world literature? Or did he inaugurate a form of comparative literature that could save the discipline from its untimely demise? Would he have welcomed the 2008 financial crisis? What might he say about America's economic dependence on China? Would he have been appalled at the rise of the “digital humanities,” or found it amenable to his own quasi-social scientific views about the role of literature in society? What, if anything, would he find to value in today's economic and aesthetic discourses? Ezra Pound in the Present collects new essays by prominent scholars of modernist poetics to engage the relevance of Pound's work for our times, testing whether his literature was, as he hoped it would be, “news that stays news.”

4. “I am all for the triangle”: The Geopolitical Aesthetic of Pound's Japan

5. Ezra Pound and the Globalization of Literature

6. Ezra Pound and the Comparative Literature of the Present, or, Triptych Rome/London/Pisa

7. Ezra Pound and the Critique of Value