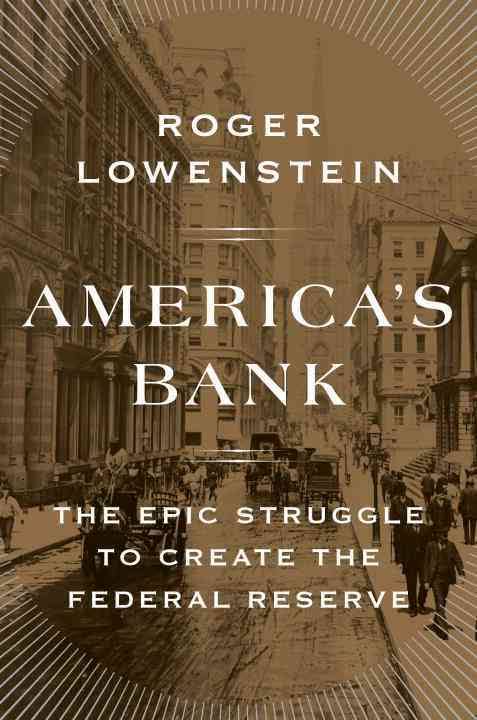 To inaugurate our new “Kulchural Affairs” series, I decided to review a recent book on a subject near and dear abhorrent to Ezra Pound’s heart: American banking at the dawn of the twentieth century. As Roger Lowenstein’s America’s Bank: The Epic Struggle to Create the Federal Reserve briefly mentions and as Eustace Mullins writes in the foreword to Secrets of the Federal Reserve, in 1949 Pound commissioned anti-Semitic conspiracy theorist Mullins to research and write a book about the Federal Reserve, which had plastered its logo on American money since 1914 (117). At that time, Pound appeared not to know much about the founding and structure of the Reserve, but Mullins’s half-historical, half-concocted findings validated his suspicions that the Fed (as Americans call it) was born out of a coordinated Jewish effort to manipulate and control international finance.

Thankfully, unlike many who have written about the Federal Reserve, Lowenstein is not a conspiracy theorist. For the first time since the Fed’s founding over a hundred years ago, Lowenstein offers a definitive history of the bankers and politicians entrenched in the battle to reform the United States’ banking apparatus after the repeated panics of 1893 and 1907. Lowenstein, former Wall Street Journal reporter, author of The End of Wall Street, and a director of a successful New York-based investment fund, has compiled like no other author an overview of the causes and consequences of the United States’ distinctive approach to banking, an approach modeled as much on American federalism and separation of powers as on European central banking.

The narrative Lowenstein employs, amply substantiated, is that “The Epic Struggle to Create the Federal Reserve” was largely a battle between a few Northeastern businessmen and politicians against the great mass of heartland populists and agrarians hostile to central power. These two factions Lowenstein affiliates with the two camps dividing America since its founding, camps which remain relevant today: the Hamiltonian federalists in favor of energetic central government, on the one hand, and the Jeffersonian/Jacksonian anti-federalists in favor of localized rule, on the other. In two parts, Lowenstein outlines how the balance of power shifted, rather rapidly, from the latter camp to the former, pivoting around the crucial and much debated Aldrich Plan, conceived under secretive—or, as Mullins and Pound would phrase it, conspiratorial—circumstances on the remote Jekyll Island off the coast of Georgia.

Indeed, Senator Nelson Aldrich of Rhode Island, for whom the Aldrich plan was named, emerges as the protagonist of this tale. With a revisionist historian’s conviction, Lowenstein attempts to position Aldrich as the herald of reform amidst an inimical throng despite a century’s worth of slander against the man in history books and textbooks on the subjects of both the Federal Reserve and Roosevelt-era trust-busting. To be sure, as Lowenstein points out, Aldrich was for many years a puppet of Wall Street who, “[l]ike many politicians of the Gilded Age, . . . genuinely believed that society benefited when its elected leaders were guided by men of wealth” (42). However, his obstinate loyalty to the Civil War-era National Banking Act, structured largely to benefit the interests of his corporate sponsors, eventually succumbed to reason (12-14): In 1907 Aldrich witnessed the fortunate but unsettling way in which one businessman—J. P. Morgan who “filled the vacuum of central banker like a Medici prince”—singlehandedly quelled the panic and saved many financial institutions from extinction (64-66).

The man most responsible for winning over Aldrich to the idea of a national reserve system more akin to those in Europe, was German-born Jewish banker Paul Warburg. Having immigrated to New York City in 1902 to manage the firm Kuhn, Loeb & Company, Warburg scoffed at the primitive banking system of his adoptive country (29-31). The United States had had two central banks before the Civil War. The first, endorsed by Alexander Hamilton and George Washington, lasted from 1791 until 1811, despite Thomas Jefferson’s protest, while the second, endorsed by James Madison, lasted from 1816 until 1836 when Andrew Jackson, the first frontier president, crushed it (2-3), an event included in Pound’s Cantos 88-89. For almost eighty years, then, the United States boasted of no unified banking authority but instead “was a monetary Babel with thousands of currencies; each state regulated its own banks and they collectively provided the country’s money” (11). To an immigrant accustomed to German exactitude, such a system would not do.

The Aldrich plan was the first attempt at reform. Crafted on Jekyll Island by Senator Aldrich, Professor Piatt Andrew, and Arthur Shelton (Aldrich’s secretary) along with bankers Paul Warburg, Harry Davison, and Frank Vanderlip, the plan failed—not on its own merits—but largely because of Aldrich’s damaged reputation as a public official in bed with private interests (107-108; 127-146). Reform took new life in 1913 under the newly elected Democratic President Woodrow Wilson, who manifested the perfect blend of Hamilton-Jackson heritage. Raised in the South, educated in the Northeast (141-142), Wilson assuaged the concerns of Democratic Party and progressive leader William Jennings Bryan and pushed reform through Congress with the help of Representative Carter Glass (Democrat, Virginia) and Senator Robert Owen (Democrat, Oklahoma) (211-214). Strangely, perhaps miraculously, the faction that had refused centralized banking for over a century enacted Glass-Owen, (otherwise known as the Federal Reserve Act) on December 23, 1913 (251).

In the book’s final chapter and epilogue, Lowenstein judiciously summarizes the differences between the Fed then and now, and in general remarks upon the way in which it was originally modelled on the federal structure, that is, the separation of powers among local, state, and central governments, most clearly enunciated in the U.S. Constitution. However, the twelve regional reserve banks stretching across the country have gradually capitulated their autonomy to Washington, D.C.’s Federal Reserve Board, largely as a result of economic crises such as the Great Depression and the recent recession for which even the Federal Reserve was, in some people’s view, too decentralized or too weak to prevent.

Lowenstein and I could only be a little more different than we are. I am a Southerner who tends to sit on the Jacksonian side of the aisle on the banking question, while he is the New York-born son of a corporate lawyer who makes no attempt throughout America’s Bank to hide his bias in favor of the Federal Reserve System. Despite our kulchural differences, however, I find Lowenstein’s treatment insightful and compelling. For those, such as myself, still suspicious of central banking and un-backed fiat currency, his thesis that the Federal Reserve Act arose—not out of some conspiracy as Mullins-Pound would have it—but out of a genuine compromise between the two historical factions of the United States and out of a respect for the federal system, I have found helpful and encouraging. For those, like Lowenstein himself, who tend in the other direction, Lowenstein offers this check and balance in the final paragraph of his work: “The Federal Reserve Act did not guarantee sound monetary policy any more than the establishment of Congress could guarantee good laws” (270). In sum, the book is so useful to understanding exactly how the Federal Reserve came to be, that I cannot begrudge Lowenstein his bias, even if at times I find him dismissive of the “prairie populism” so many Americans then and now share (137).

For the Poundian concerned with kulchural affairs, America’s Bank is essential. In many ways, the book responds directly to Pound and others like him who turned skepticism about the Federal Reserve into conspiracy. In mentioning Pound, Lowenstein reveals himself as a historian well-versed in the tradition of literature on his subject, one who has weighed and measured viewpoints and found that the simplest answer (while perhaps not the most scandalous) is often the truest and even more absorbing than Mullins’ fiction. Lowenstein’s book offers the Poundian a better understanding of the financial milieu, the “monetary Babel” in which Pound came of age as the son of a U.S. Mint assayer and the grandson of a Gilded Age Railway-man and Congressman. Like so many of his time, Pound became obsessed with the money question in both the United States and Europe, and to find out why, we ought to turn first towards America’s Bank.