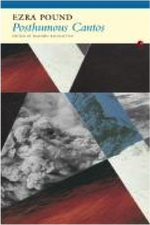 In this English revised edition of his earlier Canti postumi, (2002), a selection of Pound’s uncollected drafts for The Cantos, Massimo Bacigalupo proposes a walk in the hidden corridors of composition to reveal surprising sidelights from poetry that Pound kept in the drawer. One reason for discard was certainly too much candour, too much personal exposure: in the period of revision from 1917 to 1923, leading from the first Ur-Canto printed in Poetry to the finalized A Draft of XVI Cantos, Bacigalupo finds a surprising Ur-IV, which reveals Pound’s motives and anxieties more clearly than the published cantos have done:

‘What do I mean by all this clattering rumble?’
Bewildered reader, what is the poet’s business?
To fill up chaos, populate solitudes, multiply images
Or streak the barren way to paradise (PC 21)

Bacigalupo provides very insightful introduction, notes and timeline, reflecting on these poems and their variations to the definitive text of The Cantos. Still, it is surprising that he chose the Poetry version of the Ur-Cantos against the shortened one in Lustra, which Pound considered better and championed in a letter to Joyce (L/JJ 122). Whatever may have been the reason of this choice, the method of the final poem can be discerned from these fragments which are not merely poetry created from previous material resources. There is so much architecture, not only in the references to places and personages from history, but in the language itself. Behind the ghostly paradigms, fragmentary as the Posthumous are, they always point to the completed poem. However, it is occasionally a pitch battle of great emotion in the struggle of poetic creation towards final form. In this respect the frozen, incomplete architecture of the Posthumous is a work rising, intensely satisfying and not at all fragmentary. The project admits to the “Sweet lie! — Was I there truly?” (PC 7). The momentum of this sort of interrogative aesthetic subtext is arresting and can be said to have more emotion than the finalised version. Towards the close of Ur-I, it becomes metaphysical: “Are they gods behind me?” (PC 8)

Wordsworth, as champion of a more natural language makes an appearance in Ur-I which Pound staged as the earliest ascent/descent into The Cantos and a conversation with Browning: “Give up th’ intaglio method’”; “you mix your eras”; “To set out so much thought, so much emotion.” Browning is credited and revered but Pound has the “beastly and cantankerous age” to account for (PC 3-4). The poem is quite a paean to the elegant and erudite Browning with his “speech figurative” but not to simple, natural Wordsworth: whereas the writer of The Cantos wants to use “straight simple phrases,” he launches into the line “Gods float in the azure air” (PC 6). The presence of the Ur-Cantos I-IV will immediately grasp the attention of aficionados. It closes with St Trophime - looking ahead to Canto XLV.

Posthumous follows The Cantos in eight sections, from 1915 to 1972. The glorious 1922/1923 appear confirmed as Pound’s pinnacle years when The Waste Land prompted him to “radically revise the overture” and to give “quasi-final form to Cantos 1-16 for book publication” (PC xi). Choosing not to tell, but show, the much sought-for beginning of The Cantos can be located in Pound’s efforts of revision from Ur-III to Canto I, particularly where the translation of Homer XI is set in the language register of The Seafarer : from “Down to the ships we went, set mast and sail” (PC 18) to the familiar “And then went down to the ship,/ set keel to breakers” (I/3). Bacigalupo does not emphasise that the meeting with Olga Rudge added fire to the poet’s product. Pound’s vital muses, including Gonne, Martinelli, and Spann were essential provokers of creative eruptions that enabled The Cantos. In his "Italian Drafts," hidden among his manuscripts, we find an intimate "e ricordai Iseult, ch'era il grande amore" (PC 84).

The Paris section is brief; one fragment is repeated three times in a draft: “No ancient glory ever fades from the world” (PC 29). Sho-Shu and Tyro from Canto II, are positioned and repositioned. And memories about encounters with Eliot, once in 1919 at Excideuil and once in Verona in 1922, which Pound attempts to weave together into a single canto. Pound’s awareness of his friend got him into trouble with Eliot because of the opening line of Canto IX (later Canto VIII) “These fragments I have shelved (shored).” When publishing the Malatesta Cantos in The Criterion, Eliot wrote in 1923: “I object strongly on tactical grounds to yr first line. People are inclined to think that we write our verses in collaboration as it is, or else that you write mine & I write yours. With your permission we begin with line 2” (Letters 2: 141). Canto IX appeared with line one omitted, which Pound conceded, at that time.

Posthumous has no Eliotics, just as Eliot has no Poundistics. This volume yields evidence of the creative process through the vast tableaux of history, visionary, and terrestrial-visionary lines. The cast list is familiar, but the hierarchy is different, proving that the Cantos in their gestation had some leading characters eventually omitted and some who “survived” through to the final versions. Bacigalupo draws a wide arc in his third section, from 1928 to 1937. The fragments are unfortunately undated so we cannot make out when a poetic idea first occurred. The American presidents are missing; more excerpts relevant to the Fifth Decad are included.

Two drafts of the Seven Lakes Canto are worth notice: the first one has “rain, empty river, a voyage” follow a prologue of sea-poetry inspired by the Grotta Byron in Portovenere, not far from Rapallo. In his introduction, Bacigalupo states his fascination with this detail, which really belongs to local literary history: Byron, Shelley, Henry James, Pound and Seamus Heaney had visited and fantasized about the place. Including Heaney as “the fourth [fifth, rather] towering presence” along with these luminaries in “apostolic succession” strikes me as bizarre: a comparison of Heaney with Byron, even if not implied by Bacigalupo, is peculiar, unless you can imagine Byron gaining inspiration from cutting turf, milking a cow, churning butter, or claiming to find ecstasy in the water pump down on the farm.

Canto XLIX (in draft) rears up with Usury via Dante’s Geryon: “That the state by creating riches/shd. thereby run into debt.” (PC 44). One is moved to reflect that here is Pound pleading for divine economics on earth: in these shards there is a resonance of his trying to get airborne into various sublimes followed by falls into fragments. The emotion translates from articles on economics to lines like “Work is not a commodity. No one can eat it”; “capital is a ravenous danger’” and “a ravenous unsleeping peril. A poison to be watched at all times” (PC 55). There are five partial drafts for LI here, including the compelling assertion that “phallus pharos mentis!” (PC 52).

In the “Voices of War: 1940-1945” section, Bacigalupo includes a large number of drafts antedating The Pisan Cantos. Natural beauty and fragments in Greek modulate toward a poetic universe where Buddha surprisingly co-exists peacefully with Confucius. The eloquent lyrical mode breaks into glee with Erigena, who is given lines as a Plastic Paddy-the-Irishman referring to Dante’s letter to Can Grande: “at any rate he cant take a rale intherest/sure but the owld hook nose” (PC 80). These fragments communicate naturally with the drafts in Italian of the same period, which are much more substantial than Cantos LXXII-LXXIII let us assume. It is a particular service of this volume that these drafts are published with facing English translation in a special, forty-page section dedicated to them. The few pages of drafts supplementing the Pisan show a lot more ideograms than we are used to and for the first time in the history of The Cantos, they are printed, not painted by hand. This is a departure from established practice that might make us meditate on new directions for future editions of the poem. This crisp look of the ideograms continues in the excerpts that Bacigalupo uses for the next section, which he calls “Prosaic Verses 1950-1960.”

There is of course no diffidence in any of the Posthumous, the epic of history burgeoning within and eventually beyond the lines. Pound uses the word “coherence” a lot and holds conviction, visionary and otherwise: “How is it that I hear the ancient voices/clearer and more frequently than ever before.” “What thou lovest well” is present, if fragmented. Olga is much quoted and has an entire late section to herself as homage: “that she saw the Duce with level eyes.” Did he? One asks.