POUND AMONG THE POETS 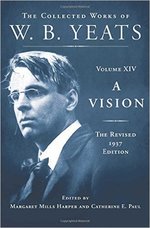 This is volume XIV of The Collected Works of W. B. Yeats published by Scribner under the general editorship of George Bornstein and the late Richard J. Finneran and George Mills Harper. The latter was a major authority on the occult Yeats, and editor of A Critical Edition of Yeats’s A Vision (1925) (Macmillan, 1978) – a very rich volume. Margaret Mills Harper, of the University of Limerick, has pursued her father’s footsteps in paths untrodden, and re-edited with Catherine Paul of Clemson University the 1925 Vision as Volume 13 of The Collected Works (2008). Now Harper and Paul join forces again to offer an annotated edition of the 1937 Vision. This incorporates Yeats’s final version of his system and is very much expanded and rewritten from the 1925 privately printed volume. Yeats however was a sick man by the time the final version was published, so (as the editors point out) he would probably have gone on revising and correcting his astrological findings, given the opportunity. The present edition incorporates corrections made by Yeats, and by his wife and collaborator George, to the 1937 edition, and offers extensive tables of corrections and emendations (225-74). Appendix II (275-98) presents earlier printed and typescript versions of important passages. This is followed by 70 pages of notes and by an indispensable index.

According to the format of this and similar Modernist critical editions, the annotations cover everything in the text, telling us even that Keats was a Romantic poet and Dante a Florentine. The present editors are not responsible for the editorial principles of the series, yet one wonders if anybody turning to a scholarly (rather than a popular) edition of Yeats needs to be reminded of such facts. However, if one omitted them there would be the question of what to annotate and what not – Spinoza no, Paracelsus yes? In the days of Wiki perhaps one solution would be to annotate only contextual matters, e.g., what Yeats does with Dante or Spinoza elsewhere in his work, if and where relevant.

To take an example, on page 21, in “To Ezra Pound,” Yeats writes: “What if Christ and Oedipus or, to shift names, Saint Catherine of Genoa and Michelangelo, are the two scales of a balance, the two butt-ends of a seesaw?” – which is about the identity and alternation of opposites. A note explains that this St. Catherine “became patron saint of Genoa for her charitable work, her intense experiences of God, and her penances” (327). However, the important point so far as Yeats is concerned is that this little-known 15th-century saint, whose body is on exhibit in the Genoa church bearing her name, is the subject of Friedrich von Hügel’s The Mystical Element of Religion: as Studied in Saint Catherine of Genoa and her Friends  (1908, rev. 1923) – an author and book that were dear to Yeats:

Must we part, Von Hügel, though much alike, for we
Accept the miracles of the saints and honour sanctity?
The body of Saint Teresa lies undecayed in tomb,
Bathed in miraculous oil, sweet odours from it come,
Healing from its lettered slab. . . .

This is from the final section of Yeats’s “Vacillation,” published in The Winding Stair and Other Poems, i.e., the book contemporary to the revisions of A Vision and Yeats’s association with Ezra Pound in Rapallo – near Genoa. Saint Catherine also wrote a celebrated treatise on Purgatory, the subject of Von Hügel’s volume and of a late and very dark playlet by Yeats. Thus a lot could be discovered pursuing these further paths untrodden – even within this carefully crafted edition.

In their introduction (xxiii-li) Harper and Paul provide an overview of the composition and publication history of this most perplexing of Yeats’s works, as well as an entertaining account of the reviews of the 1937 volume, mostly respectfully bewildered; they also, as we would expect, outline their editorial principles. The 1937 Vision is prefaced by “A Packet for Ezra Pound,” written mostly in Rapallo and originally issued as an elegant Cuala booklet “in the first week of June 1929” (as the colophon reads). A Packet, in its first separate issue, came as a revelation to Yeats’s many readers because here for the first time the poet wrote of his young wife’s automatic script as the basis of his lunar cosmology and provided much incidental information about his spectral experiences. Even today these read as very funny: “There was much whistling, generally as a warning that some communicator would come when my wife was asleep . . . [This whistling disturbed other people] so much so that I asked the communicators to choose some other sign” (12). But we can leave to the reader the pleasure of rediscovering these unintentionally comic pages, with their “frustrators,” i.e., presences that give intentionally misleading information, so that one really never knows if the revelation is true or sham.

Besides making news with these strange accounts, A Packet was memorable for its evocation of Yeats’s association with Pound in Rapallo, though at least one peevish reviewer of the first edition wrote that he couldn’t care less for such gossip. Actually, the sonorous and affectionate description of Rapallo in the opening of A Packet is, at least to me (as a Rapallo resident), a favorite passage. Yeats perfectly evokes the atmosphere of the “Keatsian” little town, with its then unassuming beauty, remote from the madding crowd, and invites us to join him and Ezra in discussing The Cantos in the latter’s Via Marsala attic. Here the editors contribute their own comedy in a note telling us that Pound’s balcony “had a view over the Lungotevere to the Golfo del Tigullio” (306). “Lungotevere” is the name of the embankment along the Tiber (“Tevere”) in Rome, and is probably a slip for “Lungomare,” i.e., the Rapallo seafront.

As mentioned above, A Packet became the first section of the 1937 Vision, which thus begins quite innocently with Yeats’s delicate sketch of Rapallo:

Mountains that shelter the bay from all but the south wind, bare brown branches of low vines and of tall trees blurring their outline as though with a soft mist; houses mirrored in an almost motionless sea; a verandahed gable a couple of miles away bringing to mind some Chinese painting. Rapallo’s thin line of mother-of-pearl along the water’s edge.

The first version of this passage, in the 1929 Packet, differs in at least one major respect:

Houses mirrored in an almost motionless sea, mountains that shelter the bay from all but the south wind, bare brown branches of low vines and of tall trees blurring their outline as though with a soft mist; a verandahed gable a couple of miles away bringing to mind some Chinese painting, and Rapallo’s thin line of mother-of-pearl along the water’s edge [no full stop]

Probably Yeats decided that it made more sense to move from the mountains to the town and not viceversa – and he may have had some ulterior symbolic motive for placing “mountains” as the first word in his occult treatise. This possibly important variant is not noted in the apparatus. I would suggest that the first version beginning with the view of the houses on the seafront strikes immediately the note of the Riviera, and is more attractive, at least in the context of the Packet. So it was a lucky inspiration that made me choose the Packet version for the inscription which is now on the house where Yeats lived in Rapallo, and which was inaugurated in 1985 in the presence of Donald Davie and the Irish Ambassador to Italy (together with a similar tablet under Pound’s balcony on the seafront).

Unlike this minor but telling rewrite (and ten lines at the end of Section XI, 17), Yeats’s more extensive revisions to A Packet are noted in the apparatus. The final part (XV) of the “Introduction to A Vision” is a case in point. In the early version Yeats answered the question whether he believed “all that this book contains” somewhat indirectly, but in the revision he produced one of his most eloquent and teasing passages, stating that the historical cycles of A Vision are “stylistic arrangements of experience,” comparable “to the cubes in the drawing of Wyndham Lewis and to the ovoids in the sculpture of Brancusi,” and added, memorably if enigmatically: “They have helped me to hold in a single thought reality and justice” (39). Lewis and Brancusi are up-to-date Poundian additions in the 1937 version; the Packet on the other hand quoted directly Pound’s version of Leopardi, “Her Monument, the Image Cut Thereon,” in Personae, and even had the cheek to correct Pound’s diction – a way of getting back at Yeats’s one-time corrector. (For more on this, see Notes and Queries 52 (2005): 499-500.) Read the excised passage as quoted in the Notes, page 325, or in the indispensable reprint of the Cuala Packet (Irish University Press, 1970), which does a lot to evoke the atmosphere of that “poets’ paradise”.

“Poets’ Paradise” was Desmond Chute’s title of his memoir of Yeats and Pound in 1929, when he  made drawings of both men, and remembered first understanding The Cantos when Yeats opened the deluxe 17-27 volume in a Rapallo café on the solemn  beginning of canto 17 (which in fact Yeats went on to include in his Oxford Book of Modern Verse). This by the way explains why in Packet and Vision Yeats speaks of discussing with Pound “that immense poem of which but seven and twenty cantos are already published” (a 1937 note specifies, “There are now forty-nine”).

Harper and Paul happily also reprint the original section VI of “Rapallo,” omitted from A Vision, in which Yeats speaks more extensively and approvingly of Pound’s work (he had been rereading Personae as well), as when he acutely finds in “Propertius,” “his self-abandonment that recovers itself in mockery,” and “everywhere his masterful curiosity” (276). One understands that this complimentary review of his neighbor’s work was too topical to be preserved in A Vision.

From the above one gathers how daunting a task of editing and annotating Harper and Paul have successfully undertaken – and “Packet” occupies only 22 pages out of 224. There is here much food for searchers after curious knowledge and the atmosphere in which Yeats’s masterpieces were created. By printing “A Packet” as an introduction to A Vision (and quoting Swift on the questionable habit of “publishing introductions to books, that are God knows when to come out” – 7), Yeats showed, as he does in his poetry, how even the most abstruse and magnificent revelations are rooted in the getting and spending of a person’s everyday life, and in his affections: a help-mate wife, an irritable friend enamored with Bach’s fugues and the Rapallo cats, another cat-loving friend (T.S. Eliot) commenting: “some of them are so ungrateful” (5). It’s already the “rag-and-bone shop of the heart” of “The Circus Animals’ Desertion,” an old man’s musings in a then remote seaside resort: “Have I not found just such a village in Rapallo? for, though Ezra Pound is not old, we discuss Guido Cavalcanti and only quarrel a little” (12). 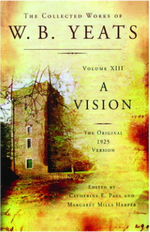