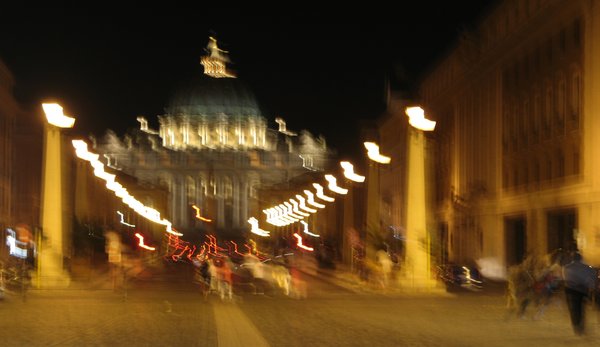 Keats and Severn by the Lateran backdoor,

come to Rome in several senses

poor. The basket with its own little stove

and its wretched stew the poet chucks

onto the stones next to the sinking marble boat.

He’s done with rhyme, he feels it

from the first. There’s shit

Napoleon’s sister is in “beautiful bad taste.” He looks

and looks at her heavy feet, the lovely dent

they make in the sensuous stone. In the flesh

the old girl’s full of leers these days

for the Royal Engineers. His bile,

his crawling skin when he sees her--

his own flesh withering on the bone . . . and

all those ousted princes dissipating along the Corso,

crumbling like columns all over the Italy that’s not

Torlonia leans over the poet’s papers,

makes an offer and another that Severn knows

bows what is not a bow exactly and goes,

something he won’t speak of, won’t want

to remember. Too poetic, Keats says to Severn. What?

The naked Paulina, the poet whispers, too

young, too beautiful. Canova’s left out the rot, the

sweetness on the verge of nausea.

tries to remember what to jot down, what

to embalm. Rich, but not lush, Keats murmurs,

turning his face to the wall.

on seeing visions—that boy, Keats was it?

An eagle now, lifting a statue of her son into the sky

from whence would come French domination,

and subdued. Why would a dead poet

carry her dreadful son out of exile? The ways

of the world are strange, she says,

around her desperate eyes.

The surgeon, before he uncovered

the boy on the table, said Well, what

have you done to yourself? lifted the towel

the mother had placed so carefully, and actually

his shoulders and neck thick with muscle,

but there was his huge ass gouged and shredded—

and deep in the debris, exposed, the gleaming

frowned at his side, the one who’d turned

nineteen on Guadalcanal, the one who said

it was the worst wound he’d ever witnessed

on a living human. Even the nurses in the ER

had seen the boy signing a big-time football

contract on the local news, a hometown angel.

And, it was gone, the trip north, the college degree.

He didn’t know this would set him free,

a stowaway through the Panama Canal,

from a tisane mixed by a child in Nishisonogi,

that he’d climb slowly to the Parthenon clothed in light,

surging through his head. The surgeon,

one of a set of rather famous twin docs,

of a random infection. The boy’s family gave up

the Methodist Church, its Hymns for Times

of Trouble and Persecution. And here was

the wonder of it on that sunlit afternoon:

There was no pain and only a little blood

as he stood in the yard across from his own

front door, the carsnose to nose in the street

going white, everything white as lambswool

stood wondering why they were looking at him

calm, barely touching his arm, then someone

holding him up as she drove the family Chevy

onto the neighbor’s inviolable grass

and someone opened the car’s back door

and someone else whispered Can you take

one step? And, you know, he could.

tucked up in the western sky—