Parody: Ancient Music is modelled after Sumer Is Icumen in, a medieval “rota,” the equivalent of a modern round and the simplest form of a canon for voices.

Sumer Is Icumen in:

The words are in the Wessex dialect of Southwest England. This round, in which six phrases are distributed across twelve bars, was composed in the mid-thirteenth century. Voices enter successively rather than in unison, when the voice preceding their own part arrives at a point marked with a red cross in the music. Up to six voices sing the same melody at the same pitch (or at the octave).

“Sing cucu,” (Pound’s “Sing Goddamm”) marks the pulse of the piece called the “Pes” (written in red in the left margin). Pound seems to stress the pulse as the bass of his “music” by the similarity of his “curse” to the sound of a drum. 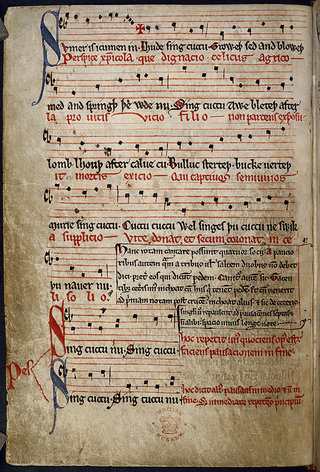 The earliest known surviving copy of the manuscript was identified in the Reading Abbey and is known as the Ms Harley 978. The British Library, keeper of the manuscript, describes it this way: “The manuscript is a miscellaneous compilation, mainly of Latin and French texts, useful or entertaining rather than devotional; it includes other musical pieces (all religious), medical material, Goliardic satires, the earliest and best text of the Lais of Marie de France, and a French poem on hawking. Sumer Is icumen In is the only Middle English text in the manuscript, and it is possible that it was included primarily for its musical interest.” The Library at one time had the manuscript on display, accompanied by a headset and a recording. The idea was for the visitor to put on the headsets and sing along. The Library’s website includes notes, translation and other information about the manuscript: http://www.southampton.ac.uk/~wpwt/harl978/sumerms.htm#Date 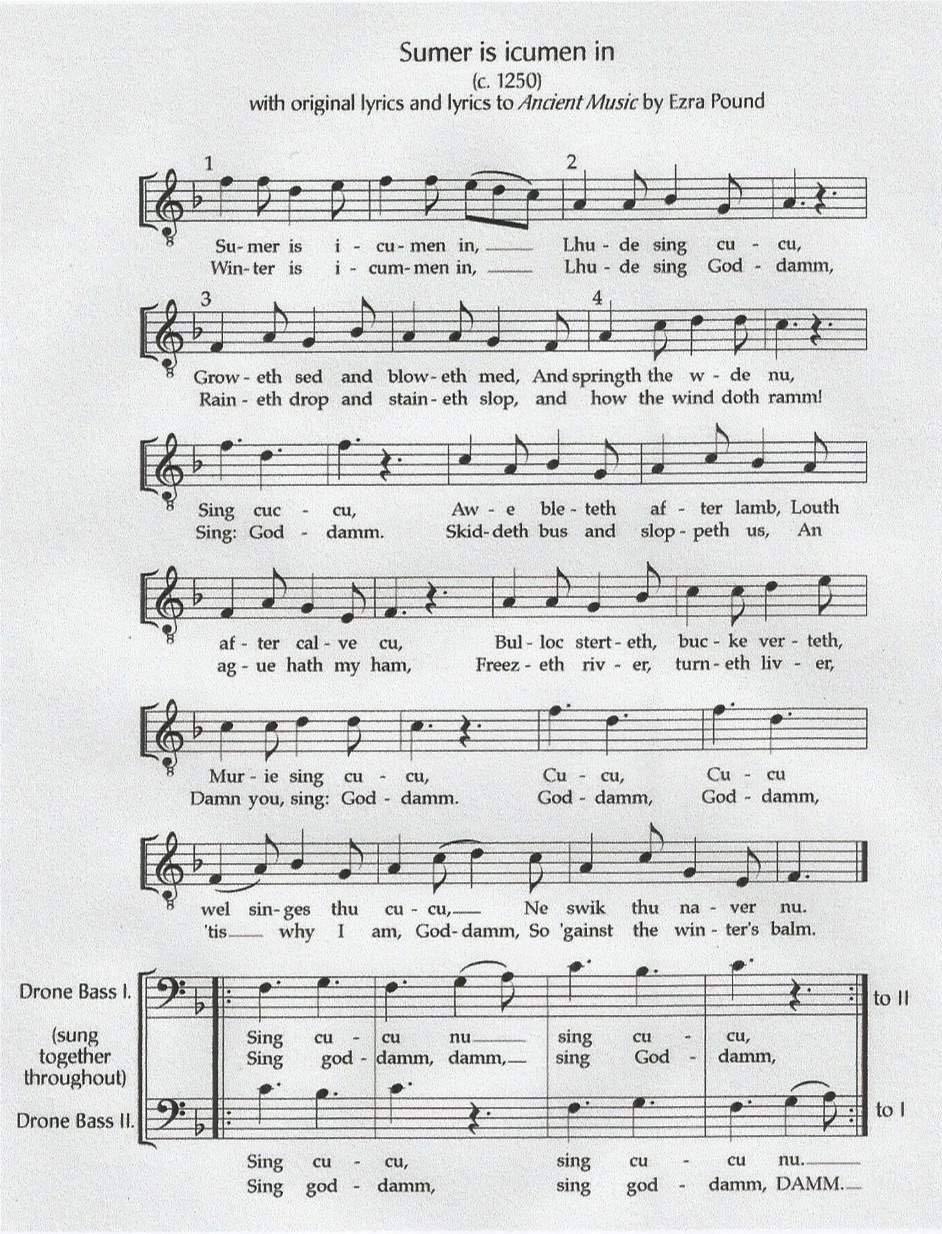 Sumer Is Icumen In

Wikipedia offers fun facts about the performance and use of Sumer, especially in media. Before tapping your way to Wikipedia, please do sing the song!

(or go to the piano and tap out the melody and Sing, Goddamm!)

Then come back to this column to follow up on the early publishing travails of Pound's Ancient Music.

Lustra was published in 1916 by Elkin Mathews and printed by Wm Clowes and Sons, Ltd. in London.
Donald Gallup writes that the Ms was typeset and proofs run off “when printer and publisher (apparently frightened by the suppression in the previous year of D. H. Lawrence's The Rainbow) refused, on grounds of indecorum of certain poems, to continue with the book as set.” (Gallup 21).

David Moody reveals that it was the senior manager W.C.K. Clowes who alerted Mathews that the material was unacceptable to him, that Mathews then consulted with Yeats, and that Pound heard indirectly about the problem from Yeats. When Pound received the proofs he found “twenty-one poems violently slashed through by Mathews’ thick blue pencil.” Clowes had described Ancient Music to Mathews as a “Pitiful parody of beautiful verse” (Moody I: 285-6).

(Ten to one you haven't sung out loud yet! Sing! Goddamm!)

A “first” English edition of 200 copies (1916) was printed with only four omissions: The Temperaments, Ancient Music, The Lake Isle, and Pagani's, November 8), a testament to Pound's vigorous defense. However, this volume was to be sold only upon special request and apparently only from Mathew’s shop.

A second English edition in 1916 carried forward the 4 omissions, added 9 more, changed the title of the poem Coitus to Pervigilium, and did not include a statement by the author, as Pound had desired, regarding the censorship. Moody's account is an important clarification of Gallup’s syntax describing this second edition; it is the one to which publisher and printer agreed upon.

Definition—“Lustrum: an offering for the sins of the whole people, made by the censors at the expiration of their five years of office.” Elementary Latin Dictionary of Charlton T. Lewis.

Moody points to the irony of defining Lustrum for his reader as a way of stating implicitly “that it was the poet who was the censor here.” (Moody 290)

A first American edition in 1917 restored some of the omissions of the English editions, Ancient Musicamong them. Sixty copies were printed, apparently produced by and distributed free of charge and “for private circulation” by John Quinn.

Ancient Music also appears in Personae, published in 1926. In the collected volume, ed. by Walton Litz, there is a note: “This is not folk music, but Dr. Ker writes that the tune is to be found under the Latin words of a very ancient canon.” (121) Was this a wink? A suggestion that behind this very playful poem, there is a trace to be followed?

(But notice how far we have gotten from the music itself, Sing! Goddamm! Goddamm!)

Walter Baumann for information regarding BLAST, Personae, Gallup, Ruthven and a correction to Eliot’s source for “The Tradition” in Literary Essays, and

Roxana Preda, for suggestions and additions to the text.