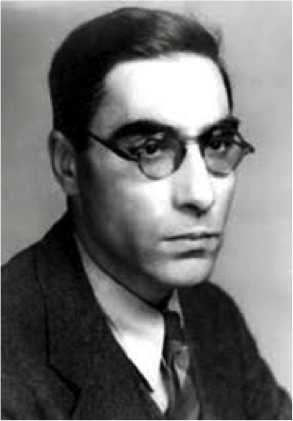 The Selected Letters of Louis Zukofsky.

Barry Ahearn’s edition of The Selected Letters of Louis Zukofsky was published last year on Jeff Twitchell-Waas’s Z-Site: A Companion to the Works of Louis Zukofsky, a compendious and growing website made up of annotations to Zukofsky’s poetry alongside a growing number of other study aids relating to the poet. The Selected, which is included as a read-only document on the site, follows Ahearn’s conventionally published collections of Zukofsky’s correspondence Pound/Zukofsky: Selected Letters of Ezra Pound and Louis Zukofsky (New Directions, 1987) and The Correspondence of William Carlos Williams and Louis Zukofsky (Wesleyan University Press, 2003), as well as various fugitive publications in journals and excerpts in academic publications. Another volume of Zukofskian letters, Niedecker and the Correspondence with Zukofsky, 1931-1970 (Cambridge University Press, 1993), was edited by Jenny Lynn Penberthy though Zukofsky’s side of the correspondence is not included there. There are no letters to Niedecker in this collection either.

In his introduction Ahearn tells us that Zukofsky’s most significant extant letters were sent to Pound, Williams, Kenneth Rexroth, Robert Creeley, Jonathan Williams, Robert Duncan, Hugh Kenner, Babette Deutsch, James Laughlin and Harriet Monroe – all of whom are represented here, though he chooses to focus on correspondences with certain writers rather than providing a comprehensive overview of all the writers (thus we see relatively few to Duncan, for example, but lots to Creeley). The letters to Pound are already largely represented in Pound/Zukofsky, and as this collection does not repeat any from that selection, Zukofsky’s relations with Pound are relatively under-presented here, though Ahearn has nonetheless dug up a selection of previously unpublished letters that will be of great interest to any Poundian (twenty-one letters that were not included in Pound/Zukofsky can be found in this new Selected). The more comprehensive nature of The Correspondence of William Carlos Williams and Louis Zukofsky means that only three letters to Williams (that had not been found in 2003) are included. The omission of two correspondences which must be among the most significant of Zukofsky’s career inevitably distorts the picture here, and the Selected should best be consulted alongside those other volumes.

The first included letter is from September 1st 1920 and accompanies a sixteen year old Zukofsky’s submission of translations of some poems by the Yiddish poet Yehoash to Poetry magazine, and the last is dated the 26th of December 1975, and was sent to Hugh Kenner, about two years before the poet’s death. We see, then, American poetry in the twentieth-century lived through in large part – from the triumphs of first and second generation modernism in the 1920s and ’30s through to the quite different poetical battles of the 1970s – from letters to Pound and Harriet Monroe to discussions with Robert Kelly, Robert Creeley and even a mention of the great British avant-gardist Tom Raworth. We see Zukofsky attempting (and, as it happens, failing) to launch his career in 1920 and then we see him concluding his career with a kind of official academic acceptance represented by Kenner.

A notable absence from this timeline is the early correspondence with Zukofsky’s fellow Objectivist George Oppen, whose letters remain unlocated. It is likely that those with an exclusive interest in Zukofsky’s early activities with Oppen around the period of the Objectivist number of Poetry and An “Objectivists” Anthology may have hoped for more materials – as there is rather little here on that period of Zukofsky’s development, which is better represented in the Pound and Williams collections. Perhaps the most interesting run of early letters are those sent to Kenneth Rexroth, written around the time of the greatest puffing of Objectivist Verse, in 1931. These letters offer a slightly tense justification of Zukofsky’s poetics (a poetics that is openly Poundian at this stage) alongside a critique of Rexroth’s poems that would seem to have caused some irritation.

The other clear message we receive from the pre-war selections is the extent of Zukofsky’s precariousness through this period – a time when food was sometimes in short supply, and during which books were almost inaccessible.

Unlike the letters of some of Zukofsky’s peers (such as Pound’s, Charles Olson’s and those, as yet unpublished, letters by Basil Bunting), the selection is not really a treasure-trove of either incisive literary criticism or personal colour. Zukofsky is far from loquacious on the matter of his own writing, and rather a lot of this collection deals with relatively mundane details. Nor are there many tantalising biographical inclusions; this may partly have to do with the Zukofsky estate’s restrictions on the collection, though the poet’s own reticence and the genuinely quiet nature of his life would seem more likely. Perhaps the most revisionary thing to be found in this collection is actually the great variety of younger correspondents that Zukofsky engaged with in the latter part of his career; though he rarely has anything that revelatory to say, the fact that such conversations were going on at all should prompt us to reconsider Zukofsky’s oeuvre. Creeley is the most frequently addressed of this generation, though there are also significant letters to Duncan, Robert Kelly and Cid Corman.

Many parts of this Selected will be of interest to Poundians. The new letters to Pound are well chosen; there are interesting letters relating to Zukofsky’s Pound-funded trip to Europe in 1933 that add detail to this crucial part of the poet’s development, and more information to our understanding of the Rapallese “Ezuversity.” Relatedly, Ahearn includes a series of letters to Jonathan Williams detailing the Zukofsky family’s 1957 trip to Europe, during which they undertook a most Poundian periplum, visiting Rapallo and a selection of other Poundian locales in the UK, France and Italy (236-40). The bare facts and personal assessment that Zukofsky offers Williams come alive when compared with the strange poetry that came out of that trip, the important late poem "4 Other Countries."

Another amusing moment for Poundians will be the somewhat scandalised letter of introduction that Zukofsky offers to Ruth Witt-Daimant on behalf of Pound’s late “muse” Sheri Martinelli in October 1958 (252), in which Zukofsky grudgingly vouches for her wayward character, while also communicating a strong sense of nervousness about her unruly and unconventional personality. Zukofsky’s “Outline of Project for a Study of the Writings of Thomas Jefferson” (332-33) is also included as an appendix, in which the younger poet, in February 1940, describes a rather Pound-like project that didn’t finally materialize.

While an online resource, this ebook is properly edited, and a thorough and useful introduction by the editor, a note on “Editorial Practice,” a “Calendar of the Letters,” a section of “Biographical Notes” and an index are all included. The letters are placed on alternate pages of the document, with notes facing, making for an uncluttered and helpful reading experience. In all of this the Selected accords with the highest standards of academic publishing and outstrips most online projects of this kind.

That said, there are elements of its presentation that are not ideal. The text is set in a sans-serif typeface that offers an unappetising prospect to the reader beginning this 350 page document. Worse, the document it is not searchable or downloadable – luckily the index allows readers to search through the document as they might a conventionally printed book, though it would be preferable if it were searchable like other e-publications.

Zukofsky has been well served by the Z-Site; in the site’s original intention of providing commentary to the poems, useful bibliographical materials and now in this marvellously thorough collection of letters. One might also wish to read the other half of these very interesting correspondences, however; the letters written to Zukofsky. Beyond the Pound, Williams and Niedecker volumes (the last of which doesn’t include Zukofsky’s side of the discussion) very little is available in this regard, and we can hope for more in the future. 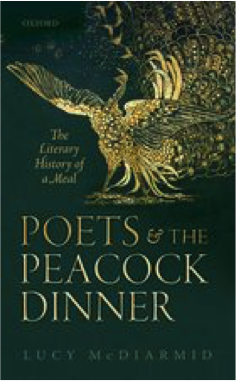 The Literary History of a Meal  .

On January 18, 1914, seven male poets gathered to eat a peacock. W. B. Yeats and Ezra Pound, the celebrities of the group, led four lesser-known poets to the Sussex manor house of the man they were honouring, Wilfrid Scawen Blunt: the poet, horse-breeder, Arabist, and anti-imperialist married to Byron's only granddaughter. In this story of the curious occasion that came to be known as the 'peacock dinner,' immortalized in the famous photograph of the poets standing in a row, Lucy McDiarmid creates a new kind of literary history derived from intimacies rather than 'isms.' The dinner evolved from three close literary friendships, those between Pound and Yeats, Yeats and Lady Gregory, and Lady Gregory and Blunt, whose romantic affair thirty years earlier was unknown to the others. Through close readings of unpublished letters, diaries, memoirs, and poems, in an argument at all times theoretically informed, McDiarmid reveals the way marriage and adultery, as well as friendship, offer ways of transmitting the professional culture of poetry. Like the women who are absent from the photograph, the poets at its edges (F.S. Flint, Richard Aldington, Sturge Moore, and Victor Plarr) are also brought into the discussion, adding interest by their very marginality. This is literary history told with considerable style and brio, often comically aware of the extraordinary alliances and rivalries of the 'seven male poets' but attuned to significant issues in coterie formation, literary homosociality, and the development of modernist poetics from late-Victorian and Georgian beginnings.

Prologue: Seven Poets and a Peacock 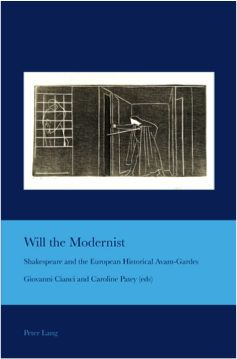 Shakespeare and the European Historical Avant-Gardes  .

Why was the Bard of Avon so frequently on the agenda of avant-garde writers in Britain, France, Italy, Portugal, Germany and Ireland? This volume explores the rich and diverse landscape of Shakespearean encounters in the tormented aesthetics of pre- and post-World War I Europe. However manipulated, deformed or transfigured, the Renaissance dramatist was revived in infinite guises: verbal, philosophical, visual and linguistic. Was he an icon to be demolished ruthlessly as the expression of a stale past or, on the contrary, did his works offer the foundation for new and provocative artistic explorations? Was he an enemy, a foil, a mirror? As they cross the borders of European countries and languages, the essays of this book interrogate Shakespeare’s living presence and chart the multiple facets of his vibrant and chameleonic afterlives as no single volume has done before. The exploration of territories situated beyond Anglophone boundaries partly displaces the Bard from his given niche in English culture and retrieves lost or marginalized Shakespearean voices. The annotated bibliographies which complete the volume greatly extend the territory of scholarship and offer a precious map of orientation in the maze of critical works.

Giovanni Cianci: Introduction: The Agon with the Bard –

Massimo Bacigalupo: Yeats and Pound: A Poetics of Excess and Pastiche  –

Carlo Pagetti: ‘Where there’s a Will, there’s a Way’: The Dialogue between Virginia Woolf and Master William –

Claudia Corti: ‘As you Disguise me’: Shakespeare and/in Pirandello –

Vincenzo Russo: Fernando Pessoa: A Peripheral Shakespearean Out of his Time –