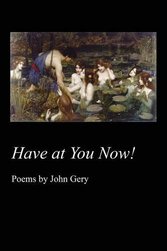 As the Secretary for the Ezra Pound International Conference (EPIC) and the Director of the Center for Literature at Brunnenburg, Dorf Tirol, Italy, John Gery is
familiar to most Poundians. John is, however, a Research Professor of English and Seraphia D. Leyda Teaching Fellow at the University of New Orleans. His books of poetry include, among others, Charlemagne: A Song of Gestures (1983), The Enemies of Leisure (1995), American Ghost: Selected Poems (1999), Davenport's Version (2003), A Gallery of Ghosts (2008), and Lure (2012). We are proud to offer a few poems from John’s recent collection, Have at You Now! (2014).

We reproduce these poems by permission.

offers no comparisons and teaches no lessons.

It sits across from you in this dark room

or passes by on the street, and if you should

lean toward it or attempt to exchange

a word or two, slowly it will maneuver

out of your way, its back turned

as though it hasn’t noticed you. You try

but can never pick it out in a crowd

down at the station house, although someone

you hardly know, maybe met only once,

keeps coming into your mind, causing you

to question why you seem so unlike

remember: You forget to seek relief

in the usual ways, a glass of water

or evening light. Even stranger,

you imagine returning from an errand

or brief sleep, only to find grief

in a new hat parked on your doorstep

with a basket of fresh figs! It doesn’t

matter, really, that it has a name, too,

that can be spelled out on a sheet of paper,

then erased, as haply as I,

the one typing this meek escape.

She counted the steps to the chancel, then slid

from the stream of those who’d climbed before

and after, away from the gilded red runner newly

draped there and the sign, “No visitors beyond here.”

Her fair hair, fallen to her shoulders, in the off-light

from the rafters, grew paler than heaven. No one knew

what language two worshippers spoke in one pew

while the others, like spry flowers in neat rows,

threw glances at the railings either side of the stairs,

the ivory-faced sirens beneath them abruptly aglow,

and above them the small figure flecked by the sky.

Before we withdrew, the scarf over her shoulders,

blue and red, slipped, though not indecorously,

exposing the delicate line of her neck. Only whispers,

of an undecipherable nature, broke from the nave,

cool as a cave, stark in spite of its speckled design.

Outside in the glimmer of day, after another moment,

she mentioned not the carvings we had entered to see,

nor the rose swirl in the green-gray marble I treasure,

but the unearthly music that had arisen from the choir,

no choir present, a music she must have suddenly

It was silence I had sought, where she had found,

among the quiet parishioners, a fray of song.

I, who like to sing, pass on this memory, sprung

like a shout of sprigs in spring, from one now gone.