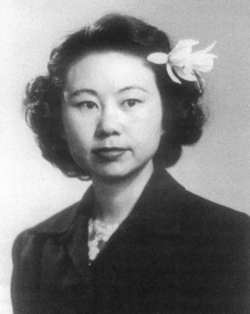 As she had never been to any of our Pound Conferences, Archie Henderson asked me in vain for a photograph of her. I did recall seeing her name in Paideuma, but had quite forgotten what her contributions were. “Palandri,” her surname, made me think that she was Italian, and “Jung,” her middle name, made me think of Carl Gustav Jung. However, I only had to go as far as the third volume of Paideuma to realize that Angela Jung Palandri had written about Pound and China. Zhaoming Qian in fact included her in his 2008 book, Ezra Pound’s Chinese Friends, under the heading “Pound as Miss Jung’s Dissertation Adviser.”

Angela Jung Palandri’s “Homage to a Confucian Poet” (Paideuma 3.3 [Winter 1974]: 301-11]) and “Ezra Pound Revisited” (West Coast Review 2 [Winter 1968]: 5-8) are both real gems, fit to be included in a gathering of other significant accounts of meetings with Ezra Pound. It was in a seminar room at the University of Washington in Seattle in 1952 that she was sitting next to “a young man who kept on writing Chinese characters in his notebook.” A foreign student from China, she pointed out to him “that some of his ideograms were written incorrectly.” He then showed her the book he was copying from. It was, of course, Pound’s Cantos.

This chance encounter with an Ezra Pound student made her choose Pound and China as the subject of her Ph.D. dissertation. “When research failed to satisfy my curiosity,” she writes in “Homage to a Confucian Poet,” I decided to write to Pound at St. Elizabeths Hospital.” To her surprise, Pound invited her to visit him. And she did so about fifteen times. On one occasion, she was even admitted when Old Possum (T. S. Eliot) was with Pound and she witnessed the joking manner in which the two dealt with each other. When Eliot invited “Miss Wheatear” (Pound’s translation of Angela’s Chinese name) to look him up at Faber and Faber, Pound “rejoined: ‘But you will never pass by his seven secretaries.’”

Angela’s one great disappointment in her relationship with Pound was that her permission to inspect the unpublished manuscript of Pound’s Confucian Odes at the Harvard University Press was withdrawn at the last minute. But she nevertheless considered her visits to Pound a sufficient stimulus for her thesis: “Through conversation and observation, I was able to make a fair evaluation of Pound’s knowledge of Chinese, which had been either over- or under-estimated by his critics. But most of all, I had, during those five months, undergone an intensive period of schooling under the guidance of a vigorous and dedicated teacher of the Confucian strain. Pound did not teach me how to write, but he taught me what and how to read. Moreover, he led me back to the Confucian precepts which have fallen into disuse in present-day China.”

She received her Ph.D. in 1955 for “Ezra Pound and China” (see Dissertation Abstract), married an American librarian with Italian roots (hence the name Palandri) and became Professor of Chinese at the University of Oregon. In 1966-67 the couple spent a sabbatical in Florence. Angela was very keen to see Pound again. She writes in “Ezra Pound Revisited” that none of the Italian Poundians encouraged her to visit him. Fortunately she met Vanni Scheiwiller, Pound’s Italian publisher. He gave her Mary de Rachewiltz’s telephone number. She, Angela claims, told her that her father was in Rapallo, that is at Sant’ 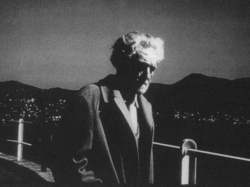 Ambrogio. In any case, Angela was expected by Pound and Olga Rudge, who may have remembered that she had seen Angela at St. Elizabeths back in 1952. The meeting was on 21 March 1967, which was after Pound had received treatment for depression. Pound did indeed break his silence and ask, somewhat to Angela’s embarrassment: “What have you done with yourself all these years?” (only 15!). When Eliot was mentioned Pound did fall “into deep silence.” His appetite was good that day, and he was very considerate with the two women, having enjoyed the walk to San Pantaleone, on which he had allowed Angela to take a photograph of him.

Angela’s view of the Pound of 1967 was that “perhaps Confucianism has failed to provide the answers; perhaps the man of action with his strong Confucian convictions, thwarted and disillusioned by the world around him, has finally withdrawn into his private world of contemplation.” It seemed to her that “he has now entered into a Taoist phase of quietude, like a calm after a tempest.”

In 1966, while the Palandris were there, Florence suffered the worst floods in its history. As a librarian Guido volunteered in the efforts to save as many of the rare books as possible.

In 1979 Angela and Guido translated and edited a critical anthology, Italian Images of Ezra Pound: 12 Critical Essays (Tai Pei: Mei Ya Publications). Unfortunately the book didn’t have the wide circulation it deserved. Pound criticism in a language other than English tends to be ignored. This is certainly the case with Pound studies in German. I should really have followed the Palandris’ fine example and done “German Images of Ezra Pound.”

Angela died on 23 May, barely six weeks after Guido (13 April). They were known as a devoted couple and are survived by two sons.

Angela Jung Palandri (1926-2016) was a Professor of Chinese (classical and modern Chinese literature) and Head of the Department of Chinese and Japanese (later the Department of East Asian Languages and Literatures) at the University of Oregon. Born in Tianjin, China, in 1926, she obtained her B.A. degree from Catholic University of Peking in 1946, and her M.A. (1949), M.L.S. (1954), and Ph.D. (1955) degrees from the University of Washington (Seattle). Palandri's work on Pound is a component of her wide-ranging scholarly output on Chinese poetry, both classical and modern.

Canto XLIX and seven other poems of Ezra Pound [a translation with an introduction, in Chinese]. Literature [Taipei, Taiwan] I: 8 (August 1967).

Walter Baumann and Roxana Preda would like to thank Archie Henderson for his active and decisive role in the research and editing of this article.