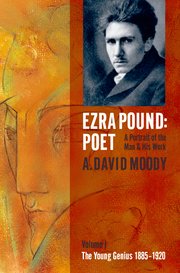 In a clear and lively narrative A. David Moody weaves a story of Pound's early life and loves; of his education in America; of his apprentice years in London, devoted to training himself to be as a good and powerful a poet as he had it in him to become; of his learning there from W. B.Yeats and Ford Madox Hueffer, then forming his own Imagiste group, and going on from that to join with Wyndham Lewis in his Vorticism, and to link up also with James Joyce and T. S. Eliot to create the modernist vortex in the midst of the 1914-18 war. We see Pound scraping a living by writing prose for individualist and socialist periodicals, and emerging as not only an inspired literary critic, but as a critic of music and society as well. Above all, Moody shows Pound's evolution as a poet from the derivative idealism and aestheticism of his precocious youth into the truly original author of Homage to Sextus Propertius and Hugh Selwyn Mauberley. We find Pound established by 1920 as a force for revolution in poetry; as a force for the liberation of the individual from stifling conventions; and as a force for renaissance in America. We find him becoming committed, moreover, to the reform of the capitalist system in the name of economic justice for all.