Hariot Double probes the life and work of Thomas Hariot, mathematician and astronomer, and that of Joe Harriott, Jamaican saxophonist, with focus on the New World and London. Hariot’s scientific expertise led him to explore and describe Virginia (now North Carolina). Harriott travelled in the opposite direction to immerse himself in the London jazz scene. Both were pioneers of their respective crafts, involving cross-cultural shifts. These narratives are paired via a central section which deals with the contemporary world. The poems included here are from that part, "Intermean." Alan Halsey’s illustration is one of 58 graphics executed for the book. 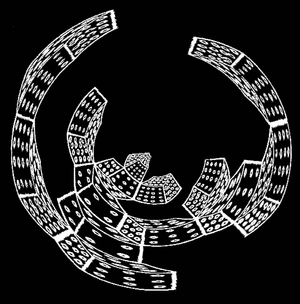 Marks of promise laid across

a counting house must feed

on absent life: one half or more of We

The layout says it, a bed of bodies gobbled

behind limestone and marble—

Threadneedle: a retort difficult to pass

without a secret formula.

All turns to prop what’s fixed,

Over the water, a message buzzes:

get each Doe (John or Jane) hooked on a loan

and parcel the risk, longtail

so it isn’t seen.

and the yield goes on forever.

though the value comes from something else

Muck to gold, the old dream is a bubble.

What moves outside the bell curve?

Who steps in to help the mug?

I sang it once before:

a fit of quick design and years waiting

Just another brief—scrape the pox

from a tent or cave. Brass call

to sort any trouble for good.

on a crown of rock. Smirks

Will anyone force the pass? clamber

from a frozen sheep, dash in a tunnel

through scrub and boulders.

you could tread on a pressure plate,

get a dose of confetti.

speaks tribes not a country.

Must be spited for yesterday’s broil.

a devil as what we slip

and who’s the cleverest?

Alone, some hood by a checkpoint,

to buttons and facings.

Must be the worst. Behind

Goozur-like we guard a thing not ours.

If all were settled, jung-i-kalūs,

Patience to make the thing worthwhile,

Dreams are the soul in flight.

A surge-rider won’t take anything back.

Ruinad: certain phrases are taken from the vocabulary of Persian, Hindostani and Other Oriental Words in Lady Sale’s Journal of the Disasters in Affghanistan 1841-2 (1843) or from the text of this work.

zubberdust = overbearing, with a strong arm (hence “zubberdusty” in Kipling, “A Conference of Powers” and Soldiers Three).

jung-i-kalūs = a fight or battle ended.

Runrunaway to make your strip of sand

The eel tastes of petrol

You sneeze black in a camera smile

of giant worm, a toothed wheel

in the old Westbourne

then on through tangled rod and gut—

even the eye of the needle, between Northern Line

find beneath the smashed Astoria

to the Plague Pit (No Man’s Land), 13 skeletons

for the next advance