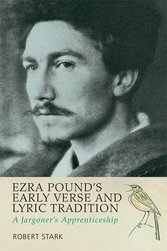 In his book, Ezra Pound’s Early Verse and Lyric Tradition: A Jargoner’s Apprenticeship, Robert Stark traces Pound’s developmental use of specialized and deliberately opaque poetic vocabularies that utilize their aurality and linguistic heterogeneity to defamiliarize and, thereby, create direct and authentic relationships with their subjects. To accomplish that task, Stark begins by offering a dichotomous but not mutually exclusive definition of “jargon.” He writes:

The word [“jargon”] originally meant ‘birdsong’ and was not thought of as meaningless gibberish at all, but as a powerful and eloquent natural language bespeaking the disposition of the gods and proscribing, therefore, the lives of mortals. Subsequently, the significance prized by augurs and poets came to be disregarded, and the word came simply to designate ‘the inarticulate utterance of birds’.” (15)

Due to that evolution of meaning, “jargon” can now refer to “poetic devices that, by virtue of their musical qualities, resemble birdsong,” “‘unintelligent, meaningless talk,’” “language deemed ‘barbarous, rude or debased’ which is usually foreign and is often of hybrid or polyglot form,” or “‘a conventional method of writing or conversing by means of symbols otherwise meaningless’” (15). Apart from its appendix, the remainder of Stark’s book braids together several illustrations of Pound employing those various types of jargon as he progresses from his early work into his mature style. Among the pieces discussed are “Hilda’s Book,” “The Seafarer,” Pound’s translations of Arnaut Daniel, “The River Merchant’s Wife: A Letter,” and “Canto LXXV.”

Despite the many applications of “jargon,” Stark seems eager to emphasize its original etymological connection to birdsong and Pound’s expression of it through the sonic or “melopoeic” attributes of his verse. Four epigrams appear in the front matter to the book and each focuses upon the language and wisdom of birds (ix). In the “Introduction” Stark argues, “Pound’s melopoeia is founded upon a … Platonic understanding of language and its operation, wherein the sound of language is irremediably part of its signifying apparatus, arguably the most decisive part” (3). At points, the book’s prioritization of Pound’s melopoeia—in not just the early verse— seems to occlude the poet’s desire to integrate it with logopoeia and phanopoeia. Moreover, Stark’s wish to connect Pound’s poetry and its sonic elements with birdsong is uneven and sometimes feels a bit forced. Stark appears to recognize the limits of and difficulties inherent in his argument, however, and consistently attempts to ground it by making concessions (which really add a palpable charm to the book and are a refreshing trait in today’s academic scholarship). He balances his stress on melopoeia by acknowledging that “Pound, unlike Yeats, found no problem in writing for the eye as well as for the ear, as The Cantos makes clear on every page” (43). Most notably, though, Stark admits very early on that “what will be most apparent by the end of this study will be the fundamental opacity of all talk about sources and originals where Pound is concerned. This is a point that Pound himself is always pained to convey – in his muddling of En Arnaut and Bishop Douglas, de Gourmont and Fenollosa, Homer and Andreas Divus. At some risk, I will stake out a similarly dialectical train” (7). Thus, despite the overt insistence on the pre-eminence of melopoeia across Pound’s verse and its relationship to birds, one understands that Stark dramatizes his points to make them explicit. More importantly, I think that Stark is aware that, due to its many threads, his argument may fray at points, but that the overall consistency of the pattern that emerges still makes it an argument worth making.

Stark most successfully connects Pound’s melopoeia to birdsong in his discussion of Pound’s translations of Arnaut Daniel. In Chapter 6, “Pound Among the Nightingales: From the Troubadours to a Cantabile Modernism,” Stark notes that troubadour poetry ubiquitously features birdsong and that Arnaut, in particular, aspired to use its acoustic properties as a model for his verse. In studying and translating Arnaut’s work, then, Pound encountered a veritable textbook of prosodic forms based on the clear and distinct notes and patterns of various types of birds and their unique sequences of chirps, coos, and warbles. Notably, both Stark and Hugh Kenner attribute Pound’s own prosodic desire to emphasize and enunciate each individual word in his poetry to Arnaut’s style that approximates bird-language (134). Stark also posits that the consistent yet flexible nature of Arnaut’s bird-influenced poetic forms may have significantly affected Pound’s concept of free verse that was not “free” by any means, but instead worked to sonically evoke or concretize its subject matter and its concomitant emotions (135-136). Even though I am not certain I agree that Kenner “is consciously observing its consistency with Arnaut’s avian aesthetic” when he “famously describes Imagism as a combination of ‘specifications for a technical hygiene’ and a ‘doctrine of the Image’” (in fact, Kenner stresses the separateness of those two elements) (133), I do believe that Stark convincingly locates Arnaut as a major influence on those aspects of Pound’s Imagism. By stressing the sound qualities of discrete words in the same manner as Arnaut’s “ornitho-logie,” Pound both “use[s] no word that does not contribute to the presentation” and “compose[s] in the sequence of the musical phrase.” Even more interestingly, though, is that Arnaut’s mimetic use of onomatopoeia and cadence may have not only provided a precedent for “[d]irect treatment of the ‘thing’,” but also the type of sonic imagery that Pound uses to audibly concretize his subjects into “intellectual and emotional complex[es]” (Pound, “A Retrospect” 3). Connecting Arnaut to Imagism in that manner sheds light on and brings attention to an important element in Pound’s Imagism that scholarship on the subject frequently overlooks.

Along with his examination of Pound’s use of melopoeic jargon, Stark does an excellent job identifying Pound’s “barbarous” jargon as well. One of the more interesting cases occurs when Stark investigates the relationship between Pound and Caliban. Caliban appears, of course, in “Hugh Selwyn Mauberley” and Stark reminds his readers, “For the Victorians, Caliban was the quintessential foreigner, and typically American; both Pound and Caliban hailed from the same ‘half-savage country’” (82). In addition to identifying those biographical similarities, though, Stark positions Caliban and his barbarism as modeling for Pound the necessity of remaining authentic to one’s self and one’s modes of self-expression rather than deferring to commonly accepted standards of decorum (84). One finds Pound, therefore, often attempting, like Caliban, to manifest his own brash individualism through forms of idiosyncratic language. As Stark keenly points out, Pound uses a “preponderance of ’st elisions throughout Ripostes (1912) – ‘mak’st, ‘brav’st’, ‘thou’st’, ‘know’st’, ‘knew’st’, ‘call’st’, ‘dar’dst’ and ‘mad’st’, for instance –” that “evidently originate in [The Tempest], where they often serve to indicate the distinct speech of the islanders, Caliban especially” (97). Notably, “Caliban’s language is primal and percussive rather than limpid and grandiloquent” and, thereby, offers Pound a means to disrupt both the habitualized signifiers and sonorities of his contemporaries’ verse. Moreover, by stressing its consonantal values, Caliban’s language and elisions emphasize the same melopoeic features as Arnaut Daniel’s verse, which would then further reinforce Pound’s continued use of those sound elements and further add to their allusive referentiality.

While Stark’s book does a fine job providing examples of Pound employing various forms of jargon, it is certainly at its best when it isolates a singular work in which Pound utilizes the full spectrum of jargon types. One such instance comes in Chapter 5 when Stark focuses on Pound’s version of “The Seafarer.” Fittingly, Stark analyzes Pound’s use of the word “jargon” and explains that, in translating the “hemistich ‘sipas secgan’” to “journey’s jargon,” Pound “captures” not only the prosody of the original, but also the “virtuosic, cantabile gamesmanship” of the Seafarer-poet (110). Likewise, when the Seafarer hears birds overhead, Pound’s “alliteration,” “grave spondees,” “consonantal congestion,” and “resolution” allow the Seafarer to audibly present the “hideous crying” of those birds in his own “‘living tongue,’” which is “the solipsistic speech of a friendless margin-alien” (112-113). In particular, Stark notes Pound’s qualification of the sea eagle’s speech as a “scream” and explains that “the word ‘scream’ initially refers to a high-pitched, piercing noise that is expressive of pain, or other sudden emotion; it is also etymologically related to ‘weep’. In Old English, moreover, the word is already used in a special sense for the cries of certain birds.” Thus, he concludes:

[Pound’s translation] works, much as the original works, by inviting informed readers to consider the philological sense of the language in addition to the contemporary and habitual senses; supplementing the meaning in a recondite and condensed fashion, it offers ‘access’ to an unfamiliar but significant realm of meaning. At the same time, of course, this word is onomatopoeic, and so claims our attention as jargon in the manifold sense. (114)

In his explication of “The Seafarer,” then, Stark shows his readers how, even early in his career, Pound strove to combine sound with sense in his poetry and could do so by layering the varied denotive and conative types of jargon on top of one another to present an opaquely substantive and four-dimensional reification of his subject matter.

Admittedly, after reading back through Ezra Pound’s Early Verse and Lyric Tradition: A Jargoner’s Apprenticeshipand writing this review, I have a clearer sense of the book’s argument and can, with greater confidence, “affirm the gold thread in the pattern” so to speak  (Pound, “Canto CXVI” 817). Yet, despite its overall coherence, I can’t escape the feeling that Stark did not originally intend to apply his theories regarding jargon to a study of Pound. Instead, it seems he saw that, without much difficulty, he could correlate a separate consideration of jargon with the poetry of Ezra Pound and that, in doing so, could add some very useful analysis to the poet’s very individualized and complicated relationship with opaque vocabularies. What contributes most to that sense is that Stark’s Appendix, “‘Barbarians and Dark Words of God’: Poetic Jargon in Greek Drama,” does not deal directly with Pound, runs thirteen pages longer than the longest chapter on Pound, and—through its explication of Aristophanes’ play, Birds—explains the many variant forms of jargon and their relationship to birdsong so interestingly and clearly that I wish I had read it before reading the actual chapters on Pound. Prior to reading that appendix and then rereading the chapters on Pound, I found it a bit difficult to negotiate through the sheer variety of jargon’s sub-definitions and consistently resolve them and their bearing on Pound’s poetry with their origins in birdsong. Once again, however, Stark seems to have anticipated such a reaction and concludes his book proper on a (much appreciated and commendable) humble note. He writes, “I hope in the foregoing study of Pound’s early aesthetic, for all the foreignness, abstraction and stubborn erudition (mostly Pound’s I hope) to account for a delightful and humane kind of poetry.” Then, with his final words, he outlines his goal for his book, and, if that goal was truly “to not to have deciphered but, on the contrary, and rather more plainly, to have come to know [Pound’s] myriad voices somewhat better, to have become more comfortable with his still strange jargoning” (174), it is certainly a success.