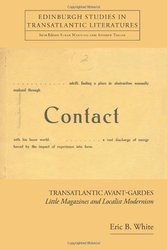 Eric B. White’s Transatlantic Avant-Gardes: Little Magazines and Localist Modernism questions the canonical division between “homemade” and “cosmopolitan” writing by using a geographically materialist approach and what he calls “locational” readings of modernist works (2). His study focuses on the little magazines, in which much of modernism was created because they were able to maintain the avant-garde works of art contained within them and the networks of communication through which much of the dialogue of modernism was exchanged (1). These discourse networks across the Atlantic and print culture have been of particular interest to scholars; White, however, seeks to offer a “contrapuntal” reading of these transnational networks in order to trace their development and to “triangulate” the configurations of modernism that grew out of them at a local level (1-2). While White’s study focuses particularly on modernists who stayed within their respective home nations, his study does include many expatriate poets as well, including Ezra Pound, Wyndham Lewis, and Robert McAlmon; at a smaller level he also includes many other fellow writers, editors, and writer-editors, from Dadaism to the New Negro Renaissance (3). Despite the broad range of local stay-at-home poets such as Williams, the focus of the study is to show how those local avant-garde artists depended on the transatlantic dissemination of little magazines to create a presentation of their “homemade worlds” to the intercontinental discourse network of artists participating in the discussion (15).

Key to the study is the distinction between “locational” and “localist” iterations of modernism (4). White asserts that in transatlantic studies, “locational” readings focus on the methods writers use to explore the concepts of place, time, and geopolitics in relation to the broader “global” movement of literary modernism (4). That is to say, “locational” readings seek to situate and investigate concepts of locality in relation to the broader pattern or “design” of modernism (4). Whereas a “localist” reading is a geographical materialist reading that focuses on a writer’s relation to particular physical and cultural markers, such as natural landscape and geography, as well as social and cultural markers like language and music, as well as visual culture that includes art and man-made landscapes such as cities (5).

Although Pound is featured often in White’s study, the main section on the poet titled, “A Walking Tour in Southern France: Ezra Pound’s Journey from Image to Vortex,” appears in the book’s second chapter, “The Vortex of the Page: Ezra Pound, William Carlos Williams, Wyndham Lewis and the Modernist Problem of Place.” This section, then, offers a “localist” reading of Pound’s early poetry that interacts with location and creates its own relationship to a specific sense of place. As the title of the section makes clear, White’s focus is on Pound’s 1912 trip to Provence where he toured the locations featured in the poetry of the troubadours (51). Combined with the studies on Williams and Lewis, White attempts to demonstrate how the early works of these three modernists symptomatically feature a disconnection between an empirical sense of geography and the subjective or “subject-oriented” poetics of early modernism (50). Furthermore, White argues that the transatlantic travel of many of the modernists had an effect on their sense of poetics, especially in relation to space, which was echoed in the little magazines they published in, thereby shaping the avant-garde art and discourse networks that they took part in, as well as those which followed (51).

Recognizing Pound’s attempts to create a precise sense of poetics and history in his Imagist and Vorticist writings, White asserts that the interdependencies between the two foreshadow the two sides of Imagism: an empirical sense of actual detail on the one hand and an appeal to multiple traditions of poetry on the other (51). White is more concerned, however, with Pound’s early attempts to deal with his relationship to the physical geography and history/mythos of Provence and the troubadours that lived there (51). In those early encounters published in Poetry and Blast, White asserts that the most significant product of Pound’s travel writings from Provence was his “heuristic diagnosis” of the incompatibility between the artist’s perception and the “objective reality” of the world around him (52). Thus, from this “failure in synthesis” (52), the image provided a middle ground between the subjective and objective, or what White refers to as “idea and thing” and “textual space and geographical place” (52). Furthermore, White argues that Pound’s Vorticist writings produce the most sophisticated expression of the mediation between the two “spaces,” especially through the conceits of crowds and rituals (52), figures that became fundamental to Pound’s interaction with American culture (52). Moreover, emphasizing the geographical materialist approach, White posits that the walking tour notes reveal to the reader that the triangulation of the microcosmic and macrocosmic forces of physical space is a difficult and often almost impossible task filled with contradictions (54).

As White moves away from the walking tour itself and towards the poetry that emerged from it, he differs from Richard Sieburth who argued that “Near Perigord,” “Provincia Deserta,” and “The Gipsy” were the only poems to come from Pound’s walking tour in Provence (57). White argues, instead, that this assertion is too restrictive, as the March 1915 publication of Poetry magazine featured several poems that deal with the poetics of location and people (57). Those poems included “Provincia Deserta,” “Image from d’Orleans,” “The Spring,” “The Coming of War: Actaeon,” “The Gipsy,” “The Game of Chess,” and “Exile’s Letter.” Along with linking those poems to Pound’s walking tour and its geographically materialist implications, White also traces the emergence of Pound’s Vorticist poetics in relation to those ideas as the trajectory of the movement towards Vorticism drew him towards physical locations and the forces that moved across them (59).