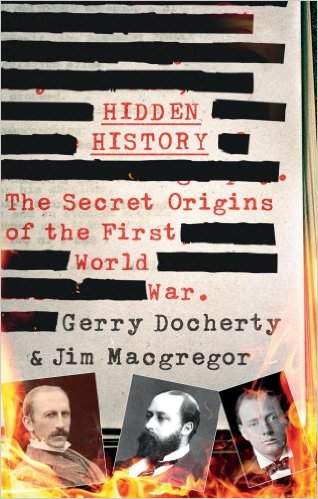 Hidden History: The Secret Origins of the First World War is historical, but historical not because it accounts for a real past in which real events took place, but because it is itself a relic of history, the latest piece in a collection of World War I conspiracy theories. Docherty and Macgregor’s too-convenient-to-be-true proposal is that “a secret society comprising members of the English ruling class was formed in London” in 1891, a society that the authors imaginatively dub “The Secret Elite” and hold responsible for the general wailing and gnashing of teeth across the globe in the first years of the twentieth century culminating in World War I (29). By means of this theory they seek to prove that “Britain, not Germany, was responsible for the war” (11). While that intention alone is admirable enough, the conspiracy they invent to prove it lacks credibility. Anticipating objections “[l]est any readers jump immediately to the conclusion that this book is some madcap conspiracy theory,” the authors plead, “This is conspiracy fact, not theory” (13, 16). But what the authors neglect to notice is that simply saying something in earnest or in a different way than before or over and over again does not turn fiction into fact, and when read in light of this principle, the interminable pages of this book drag on as so much repetitive shouting by which fools seek to enhance the veracity of their drivel by augmenting its volume.

Because of the lack of primary source evidence, Docherty and Macgregor’s book is largely a rehearsal of Carroll Quigley’s 1949 book (published posthumously in 1981) The Anglo-American Establishment (13). According to Docherty and Macgregor, Quigley was “one of the twentieth century’s most highly respected historians” who refrained from publishing his account of the Secret Elite for fear it would damage his reputation (13). While Quigley was indeed a revered professor at Georgetown University and a great influence to such esteemed personages as President Bill Clinton, his work is often co-opted by a group of conspiracy theorists Scott McLemee has dubbed “The Quigley Cult.” For their own part, Docherty and Macgregor appear to be dabblers rather than professionals, the former a retired “head teacher and author of several historical plays,” the latter a retired general practitioner. Of course, amateurs have made many great discoveries, but Hidden History is unlikely to place Docherty and Macgregor among the ranks of Michael Faraday, Gregor Mendel, and William Herschel.

In a tautological way, Docherty and Macgregor excuse their lack of evidence for the conspiracy on the conspiracy itself, claiming—in the present tense, mind you—”[Members of the Secret Elite] have taken every possible step to ensure that it would remain exceedingly difficult to unmask their crimes” (15-16). After imploring us to consider indifferently their evidence before condemning their work, the authors admit that, well, because it’s a conspiracy theory and because one of the distinguishing characteristics of a conspiracy theory is that the conspirators destroy evidence of their conspiracy, all the evidence regarding the Secret Elite has been destroyed. If by evidence we mean data that when logically and truthfully arranged, supports not a pre-conceived bias, but a rational conclusion, then we will find none. But if by evidence we mean, as the present authors do, data that when deliberately selected and arranged according to a pre-conceived narrative, suggests that narrative, then we will find provocative discussions of turn-of-the-century British imperialism. These events include Cecil Rhodes’ and Alfred Milner’s escapades and warmongering in South Africa (chapter 2), King Edward VII’s advancement of the Secret Elite’s cause of stifling the industrial and military prowess of Germany (chapter 3), the Secret Elite’s role in doling out Egypt to Britain and Morocco to France despite Germany’s protests (chapter 4), the Secret Elite’s efforts to undermine a “Russo-German alliance” in order to establish “an Anglo-French-Russian alliance against Germany” (chapter 5; 97-98), the Secret Elite’s ability to withstand changes in ruling parties by implementing a permanent strategy for foreign affairs (chapters 6-7), and over a dozen other such plot points portraying members of the Secret Elite as master puppeteers.

The authors contend that the primary mechanism by which the Secret Elite managed to stir up global conflict for British and personal interests was through secretly infiltrating and taking advantage of nationalist and ideological groups already disposed towards violence without the knowledge of their members. Of course, the primary example of this strategy comes just before World War I, which Docherty and Macgregor treat in chapters twenty through twenty-seven. These chapters reveal that the assassination of Archduke Ferdinand was orchestrated through an alliance between Sarajevo, Belgrade, St. Petersburg, Paris, and London in order to manufacture “an incident so violent, threatening or dangerous, that Austria would be pushed over the brink” of war after previous Secret Elite escapades in the Balkans failed to ignite Austrian-Hungarian ire (242). To assassinate the Archduke the Secret Elite infiltrated the Serbian nationalist society called the Black Hand unbeknownst to members of that group (242-251). In this way, the Secret Elite could maintain plausible deniability concerning the goings-on on the continent from their comfortable English manors and could ensure that Germany—and not England—would ultimately be blamed for starting and prolonging the war. Such covert activity culminated in “Anglo-Belgian collusion at the highest levels” despite the appearance of Belgian neutrality (348). Of course, no evidence of such a “collusion” exists because, the authors admit, “the Belgian ‘relationship’ was never put in writing or adopted as official policy by Britain, since that would have risked exposure to Parliament and the press” (348). Instead, the Secret Elite kept the Anglo-Belgian alliance carefully hidden so that the myth of German culpability could foment in the minds of historians down to the present day. As such, our authors conclude that the British in fact fabricated a war it was then ostensibly forced into when Germany invaded Belgium in August of 1914.

While a reasonable thesis arguing that Britain was also responsible or even more responsible for the war than Germany would appeal to the reader if adequately substantiated, by saying in addition that British culpability stemmed from the conspiratorial machinations of a Secret Elite, Docherty and Macgregor claim more than they can prove. Hidden History is therefore a lesson in how the human propensity to construct narratives may obstruct an otherwise genuine curiosity in scientifically and impartially collecting facts to see what comes of them. Indeed, history is such a problematic subject precisely because it blends storytelling and science, and it is too often the case that historians such a Docherty and Macgregor commit the sin that scientists abhor but that storytellers adore, namely, of projecting narratives onto reality. Because Hidden History serves as a case study in how good intentions are not enough to make good history, do not let this diatribe dissuade you from browsing Docherty and Macgregor’s book. On the contrary, that someone out there would publish such a monograph in a twenty-first century filled with “alternative facts” espoused by the highest offices of the land ought to be enough to incite your interest. For the Poundian, the book demonstrates the allure of the conspiracy, an allure Pound succumbed to time and time again. In fact, the work is the latest addition to the tradition Pound devoted himself to, a tradition that finds the causes of war in deliberate human design rather than in human folly and foolishness. Hidden History stands as a warning to us all against the infectious idea that we can all make up our own truth because, as our friend and poet Ron Smith says, “That’s the path to hell.”