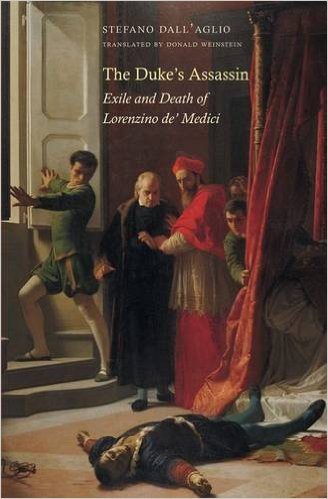 Thanks to the recently departed Renaissance scholar and translator, Donald Weinstein, we now have an English version of Stefano Dall’Aglio’s latest addition to the cannon of historical works regarding the assassination of Alessandro de’ Medici by his cousin, Lorenzino de’ Medici. This definitive, revisionist history of the years of Lorenzino’s life between his crime and his own demise is imminently appealing to the Poundian who desires a broader background concerning a subject central to cantos five and seven. In these early cantos, Pound lauds Lorenzino’s contemporary, Benedetto Varchi, for his Storia Fiorentina, which refrains from interpreting Lorezino’s motives due to lack of definitive evidence, despite being commissioned by Duke Cosimo I de’ Medici, Alessandro’s successor. Perhaps Varchi is one of those virtuous historians Pound extols in Canto XIII as he recalls “A day when the historians left blanks in their writings, / I mean for things they didn’t know . . .” (13/60). As Pound indicates, Varchi hesitates to condemn or condone Lorenzino (“But Don Lorenzino / Whether for love of Florence”). However, in both cantos five and seven, Pound considers Alessandro to be a passive “dead” character looking on his future “[i]n abuleia,” with a “tall indifference . . . / a more living shell, / Drift in the air of fate . . .” who has resigned himself to death, ostensibly garnering such a criticism from Varchi (5/19, 7/27).

Thus, Pound appears to detect in Varchi the very ambiguity Dall’Aglio seeks to clarify in The Duke’s Assassin, that is, whether we can trust either traditional Medicean or anti-imperialist versions of Lorenzino’s story. As Dall’Aglio points out, no thorough study of the matter has been published since Pierre Gauthiez’ 1904 Lorenzaccio, which, though based on document research, is now outdated in light of many recently discovered documents (xiii). In order to revise both Gauthiez’ account and to “[remove] some of the heavy ideological and romantic patina” of imperialist and republican portraits of Lorenzino, Dall’Aglio reconstructs two phases of his life from documents primarily gathered from the Archivio di Stato di Firenze and the Archivo General de Simancas, Valladolid (xiii-xiv). These two phases constitute the two parts of The Duke’s Assassin, the first, a study of Lorenzino’s murder of Alessandro and his subsequent exile, and the second, a study of the various plots to assassinate Lorenzino and his death.

In the first section, Dall’Aglio’s principal target is Benedetto Varchi. Whereas Varchi portrays Lorenzino as paranoid, desperate, and fearful in the eleven years between his murder of Alessandro in 1537 and his death in 1548, Dall’Aglio argues that Lorenzino played a central role in advancing the cause of republican liberty by serving as an ambassador to both the Ottoman sultan, Suleiman the Magnificent, and to the King of France, Francis I Valois. Dall’Aglio also presents evidence that Lorenzino even criticized Filippo Strozzi, the hesitant financier of the republican cause, for his inaction in the wake of Alessandro’s death, and that he constantly sought to advance the mission of Filippo’s two more warlike sons, Roberto and Piero. Far from the coward of imperialist histories or the hopeless exile of romantic histories, Dall’Aglio proves by means of documentary evidence that “Lorenzino’s political and military role following his assassination of the duke has been, to say the least, underestimated . . .” (79).

Despite Lorenzino’s prolonged political involvement, as Charles V, Holy Roman Emperor, secured greater and greater influence in Italy both through his ally Duke Cosimo I and by neutralizing both the Papal States and the Republic of Venice, a French-Imperial peace threatened to hinder the Florentine exile’s cause, prompting Lorenzino to find a precarious refuge in Venice. Lorenzino’s situation became even more perilous in 1547, when Charles V extradited Venetian fugitive Ludovico Dall’Armi; in return, the Venetians threatened to hand over Lorenzino to Charles V (98-99). With nowhere to turn for safety, Lorenzino hid in Venice while spreading rumors of his departure amongst his enemies while his fellow exiles retreated to France through the Alps (103-104). Why Lorenzino failed to make his escape by the same route, Dall’Aglio neglects to say, only remarking, in Poundian tone, that “questions concerning this missed departure must remain unresolved for now” (105).

The second part of The Duke’s Assassin convincingly demonstrates the falsity of the widely-accepted traditional view that Duke Cosimo I sought unendingly to punish Lorenzino for his predecessor’s murder and that he orchestrated countless plots against Lorenzino, which culminated in the attack of February 26, 1548. Dall’Aglio successfully discredits a version of the assassination of Lorenzino which holds a Medici secretary culpable, one Girolamo Del Vezzo, “[an] obscure Medici informer” whom Cosimo sent to Venice on the pretense of some other important diplomatic business but who previous historians see as responsible for fulfilling Cosimo’s desire to avenge Alessandro (150-159). Using documentary evidence, Dall’Aglio asserts that Lorenzino’s disinformation regarding his own travels successfully thwarted Del Vezzo’s plot and that both Del Vezzo and Cosimo were equally surprised when “‘two Volterrans, one called Bebo, the other Riccio,’” murdered Lorenzino outside of the church of San Polo, acting on the command of Charles V’s man in Venice, Juan Hurtado de Mendoza (159-166).

According to Dall’Aglio, while the view that Cosimo orchestrated Lorenzino’s death appealed to both Medicean and republican historians for both its demonstration of Cosimo’s might and its tragic character, in fact Cosimo proved largely apathetic toward his predecessor’s killer, while Charles V perceived Alessandro’s murder as an insult both to his imperial prowess and to his family since Alessandro was Charles V’s son-in-law by marriage to his daughter Margaret (176-186). Thus, while Dall’Aglio is sympathetic toward his precursor’s attempts, he successfully “expose[s] some of the untruths that historians have, often without knowing it, carried along to the present day” by advancing two main arguments, that Lorenzino was politically involved in Italian and European affairs in the years after his murder of Alessandro and that Charles V, and not Duke Cosmo I, ultimately desired and achieved Lorenzino’s death (190).

For its clarification of many details involving Lorenzino’s story and its meticulous study of archival evidence, The Duke’s Assassin will surely continue to be the definitive history of one of Italy’s most intriguing and dark affairs despite its controversial revision of centuries of scholarship. As the subject of Lorenzino itself demonstrates, and as Pound highlights in his Cantos, the wall between storytelling and history often crumbles under human attempts to reconstruct the unknown and to erect links between distant events whose connection is uncertain. As Pound and Dall’Aglio both demonstrate, the past reveals truths not only about itself but also about human nature, and from both the poet and the historian, we can learn to carefully tread across “the barb of time” (5/17).