The Cantos of Ezra Pound is among the most complex literary documents of the twentieth century. Within a decade of its final publication, the wide array of historical and geographical references in Pound's work prompted a two-volume companion guide of greater length than The Cantos themselves: Carroll F. Terrell's A Companion to The Cantos of Ezra Pound (1980-84). While Terrell's companion serves as a helpful tool for readers attempting to decipher The Cantos, recent advances in digital technology suggest that such resources are becoming outmoded. As a product of print culture, hidebound and paperbound, Terrell's work stands as a self-contained aid to a poem that is all but unbound in its scale and scope. And though the Companion contains entries and references of various kinds, it is completely lacking in images and maps due to the costs associated with reproducing such materials in print form.

How might the digital humanities help reframe our understanding of Pound? In order to better understand what's at stake in this question, I have embarked on a project titled "A Gazetteer to The Cantos of Ezra Pound." This initiative looks to advance scholarship in the digital humanities by demonstrating the interpretative value of digital gazetteers for texts relying heavily on geographical frameworks, building upon Terrell's example by putting Pound's places on the map, and linking those maps to archival materials, reference works, and the poems themselves. Here I proceed from Pound's sense that "an epic is a poem including history" (ABCR 46), feeling, as Pound must have, that history is made in large part of geography. A pre-eminently geographical poem, Pound's Cantos follow spatial emphases found in classics from the Epic of Gilgamesh to Homer's Odyssey.

Several precedents for literary gazetteers exist in the print archive—for example, Magoun's Chaucer Gazetteer (1961), Stowell's Thoreau Gazeteer (1970), and Mink's A Finnegans Wake Gazetteer (1978). Much remains to be done in repurposing such efforts in the context of the digital humanities. In recent years, literary cartographies have become a widespread phenomenon, from more popular manifestations such as GoogleLitTrips, primarily keyed to K-12 audiences, to the scholarly revolution heralded in Franco Moretti's Graphs, Maps, and Trees (2005), which calls for a "new critical method" (55) predicated on "distant reading" (57)—namely, reading that attends to the relationship between contextual backgrounds and textual details. Geographically inflected work in this mode yields a model Todd Presner describes as "thick mapping," whose thorough attentions can aid the work of criticism and interpretation, especially when dealing with texts as complex, elliptical, and fragmented as The Cantos.

In Olsoniana, a set of digital resources devoted to the life and work of Charles Olson, I undertook my first mapping project, "A Gazetteer to The Maximus Poems of Charles Olson." Whereas this map includes approximately 400 placemarks, "A Gazetteer to The Cantos of Ezra Pound" will eventually include a dozen maps, and is currently approaching 1000 placemarks. Beyond geospatial data, each placemark will also feature data detailing the canto and line number of Pound's initial reference, the frequency of Pound's subsequent references to that same place, and additional links to the poem in question (via ProQuest's Chadwyck-Healey Twentieth-Century American poetry database), to an encyclopaedia entry on the place in question (using the English version of Wikipedia as a default, or other versions of Wikipedia where no English entry exists), and to ready reference regarding the place in question in Terrell's Companion.

In mapping Pound's Cantos, I have organized the data according to initial mentions of places, while also attempting—somewhat quixotically—to marshal information concerning the frequency of such mentions. But what counts as a mention? Do toponyms count only in noun form, or also in adjectival form? When Pound calls France "Frogland," does that count as "France," or should it register as a separate instance? "London" appears 36 times in The Cantos, and "Londres" appears 3 times. That would seem to add up to 39 mentions, although it's safe to say that "Sodom on Thames"—as in "Sodom on Thames sold out Napoleon" (767)—probably counts as a 40th mention. Keeping track of it all can be equal parts amusing and maddening. Throughout, I have followed Pound's irreverently haphazard lead where possible, even amidst references to "Canto Whatever" and "St. What's his name."

Over eleven sequential divisions corresponding to the divisions of the poem itself, "A Gazetteer to The Cantos of Ezra Pound" offers a window on to the evolution of Pound's geographical attentions, which prove to be worldwide. By the sixth canto, he has already glanced up against Egyptian, Levantine, and Persian allusions; by the eighteenth, he has extended his reach to China and Mesopotamia. Indeed, at times, it seems that The Cantos is nothing so much as a gazetteer in its own right. There can be little doubt that Pound stands in the foremost rank of those that Rick Van Noy has classified as "literary cartographers" (3). Perhaps, then, his readers need a cartographer that can further elucidate Pound's cartographies. "A Gazetteer to The Cantos of Ezra Pound" looks to serve this purpose, helping to visualize not only those places The Cantos ranges and returns to, but also those places The Cantos omits. For example, though born in Idaho, to a family that worked their way west via Wisconsin, Pound scarcely mentions the American West or the Pacific Basin at all in the course of The Cantos.

Many Pound scholars regard The Cantos in cartographical terms. Hugh Kenner described them as a "Michelin map" that "denotes" a "verifiable landscape" (qtd. in Greenblatt 140). Donald Davie echoed this sentiment in arguing that "the first requirement for a study of Pound is a set of maps (preferably half an inch to the mile) of at any rate certain regions of France, Italy and England; the second requirement is a set of Michelin Green Guides for France and Italy … In this, the case of Pound is no different from other writers, or it is different only in degree (239)." If the maps Davie had in mind were fixed, the ones this project offers are scalable. This is not to suggest that the Michelin Green Guides are dispensable—merely that they merit supplements.

More recently, Jennifer Kilgore has praised Pound's poetics for attending to "truths of geography and topography" (qtd. in Aji 96), while Jennifer Scappettone has emphasized the "site-oriented" nature of The Cantos, which are marked by currents of "insistent dislocation" and "phenomenological concentration" (111). Out of all these critics, Kenner is the only one who has produced a purpose-built map in an attempt to elucidate Pound's poetry, in his masterful study The Pound Era (1973). Yet even this map, titled, "The Sacred Places" (fig. 1), takes a highly circumscribed approach to the question of Pound's geography, confining its attention to a set of thirty places on the Paris-Rome axis discussed in a chapter of the same name that includes black-and-white photographs of sites including St. Trophime in Arles, St. Hilaire in Poitiers, San Vitale and Galla Placidia's mausoleum in Ravenna, Tempio Malatestiana in Rimini, Santa Maraia dei Miracoli in Venice, and San Zeno and the Arena Romana in Verona. 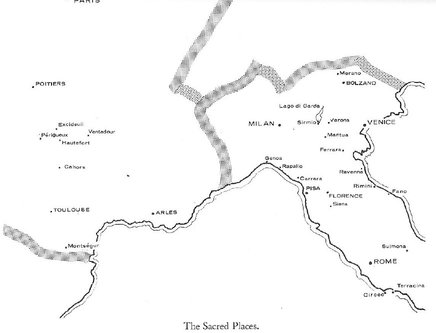 Kenner's Eurocentric window on Pound's work proves valuable but also partial, for while The Cantos ground themselves in multiple European nodes, the maps of "A Gazetteer" suggest that Pound's framing proves more decidedly Mediterranean than European in many respects. It must also be said, as Paul Stasi has argued, that "Pound wrote what can only be called World Literature" (362). To Stasi, Pound's poetry is "remarkable both in its range and in its ability to push against the national boundaries" that it works against," such that, for Pound's readers, "it becomes impossible to situate oneself squarely within a hegemonic modern Western subject position as it does to rest comfortably in the English language that is, ostensibly, the poem's dominant idiom" (370-1). Pound himself underscored his worldwide scope; as he argued in the 1930s, "if my point of view is not international and organic or structural, I believe that no international point of view can exist, or that there are very few men who can claim it with greater right" (qtd. in Stock 40).

Print maps like Kenner's offer one picture of Pound's international poetics, but digital maps can take a wider view, revealing Pound as a poet of cities, no matter what part of the world he is thinking through. With this urban orientation in mind, characterizing Pound as a poet of Europe or a poet of Italy seems overly vague. As the beta maps demonstrate, the most persistent attentions of The Cantos trace a network extending outward from Venice and the northern Italian city-states down the Adriatic coast. Zooming in on the maps in the Gazetteer and following the relevant links will help to demonstrate the depth of Pound's urbanity.

To take one key example that "A Gazetteer" helps to illustrate more palpably, in the first 30 cantos of the poem, Pound touches on a number of famous Venetian locales, from the Doge's Palace to the Grand Canal to the Rialto. While the next 44 cantos shift to other locales, Pound returns to Venice with renewed vigor in The Pisan Cantos, offering a more personal take on the city that focuses heavily on his sestiere of residence, Dorsoduro, and on an idiosyncratic set of landmarks including the Greci, the Redentore, and Santa Maria dei Miracoli.

Possessed with a clearer sense of the geographical stakes of The Cantos, those who turn to this gazetteer may gain a better sense of Pound's poetics and politics, but might also come away with a deeper understanding of world geography and world history, two subjects that tend to be underemphasized in many curricula at many levels. Scholarly audiences that turn to this gazetteer may be empowered to interact with the palimpsest that is Pound's Cantos in wholly different ways—opening up modes of reading that tend to be reserved for works in the public domain, but that might extend in this case to one of the landmark works of modernist literature.