“In February 1924 Pound began his only known attempt to compose a work based upon a poem of his own, Sestina: Altaforte (1909). Verifying the poem’s permutations in the British Museum at the time its composition, Pound followed the traditional sestina form of the poem—six sestets and a concluding tercet. Each of the end words of the lines of the first sestet are repeated in a specified different order in each of the subsequent five stanzas.1  [See the MIN 1.2 for a description of the sestina form.] Furthermore, each line of the tercet carries two of the six end words, one in the middle of the line, the other at the end. I have not been able to find among Pound’s sketches a setting of his final tercet. . . .

“The phrases are short (two to six small, quick bars), often similar but generally asymmetric, and impetuous with anapest driven leaps, creating an almost flickering quality. The sestina form, however, is used for purely structural function. There is no attempt at word painting or at a sonic/cognitive equivalent. The music matches the original poem, one note or chord per syllable, through the third line of the second sestet.  From this point musical irregularities gradually encroach upon the monosyllabic relationship with the text. His formal method was to assign one or two extremely brief music segments (each segment consisting of a different chord, or two or three chords with or without a unison note) as a “sonic signifier” to identify each line of Altaforte’s six end words. When the end word appeared in its new position in the following sestet its sonic signifier would appear as a recognizable determinant. . . .

“Remembering category #4 concerning “Criticism via music” in Pound’s essay “Date Line,” we can reflect upon the interpretive insights given us when Pound interrelates music and verse.2 As can be seen above, the temptation to read “Damn it all!” as a colloquial emphatic anapest is dissuaded by Pound’s more pungent cretic ( –  ˘– ), giving equal emphasis to “Damn-all.” At the end of the line a spondee (two quarter notes) gives accentuation to “stinks peace,” correcting a tendency to slight “stinks” as a moderately unstressed syllable if giving “South stinks peace” the quite natural reading of a cretic. Similarly, in line six of the same stanza, “heart nigh mad” might be rendered a cretic, yet Pound’s musical setting as three stressed syllables heightens the emotional pitch of the poem by raising the tension on “nigh.” . . .

“Under the influence of Antheil’s constantly changing time signatures and note durations[applied to the opera Le Testament] the solo violin sestina utilizes a constant shifting of the number of microbeats per bar from 1/4 to 21/32, with a frequency of triple and quintuple meters presaging the metric simplification of his music over the next two years. Yet Pound’s notation is not secure enough to avoid frequent miscalculations of the note lengths versus the time signatures.

“A chordal piece with almost no single notes, frequently using triple- and quadruple-stops with one to three open strings, it repeatedly necessitates the use of “broken chords” or arpeggiation. The result is often a scratchy, disjointed, leaping quality as the player prepares the fingers to approach each new multiple stop. Yet the “breaking” of the chord also favors a clarification of the harmony by lessening the biting dissonance to produce a more consonant sound, often focusing on open fifths or, in arpeggiation, the sweetened effect of an incomplete major seventh chord. Although aesthetically clarified by a few interpretive markings (bowings, accents, staccati, glissandi, sordino, string specification), technically the piece is filled with impracticalities: jagged, wide leaps; constant multiple stops; and some extremely difficult quadruple- stops, which at best render the work barely playable, if not unplayable. (These challenging famous last words often eventually offer an extremely good performance!)” . . .

Pound wrote in an April 1921 letter to Agnes Bedford: "I do think musical notation is the damndest thing to get simple facts from ever invented. Perfectly simple AFTER the fact, but impenetrable before it."

About the poem, reprinted below, K. K. Ruthven has noted that the 21st and 22nd “lines ought to be reversed, as the rhyme pattern in the fourth stanza of a sestina is ecbfad, not ecfbad.3

Bertrans de Born appears to Dante and Virgil in the Malebolge of Dante’s Inferno, 28:118, holding his head in his hand, the punishment for sowing strife and “for the goad of his tongue, and for his scorn of sloth, peace, cowardice, and the barons of Provence” (Spirit of Romance, 45). Bertrans has written about himself “Every day I contend and contest and skirmish, and defend and carry backward and forward the battle; and they destroy and burn my land, and make wreck of my trees, and scatter the corn through the straw, and I have no enemy, bold or coward, who does not attack me (SR 46). 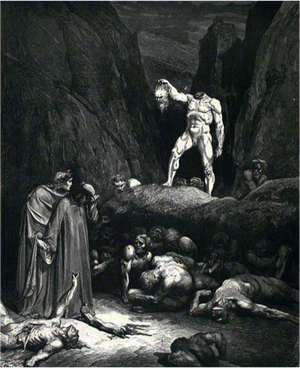 [Aside: F. T. Marinetti publishes the founding manifesto of Futurism on the front page of the 20 February 1909 issue of the Parisian daily Le Figaro]

17 May 1939 -  Pound records himself reading Sestina Altaforte, accompanying himself on drums, for the Harvard Vocarium series, Cambridge, MA

“A little while after [Peire d’Auvergne and Guillaume of Cabestang] came the other two who form with Daniel the great triad mentioned in De Vulgari Eloquentia (II,2): Giraut of Bornelh and Bertrans de Born” (Spirit of Romance, 44).

3. K. K. Ruthven. A Guide to Ezra Pound’s Personae 219. The text given is from Personae and shows the fourth strophe uncorrected.

4. The poem appears in Personae 26–28. Pound did not set the last tercet to music.