THE WORLD IN POUND’S WORK

The World of the Na-Khi

A grant from the Chinese Academy of Social Sciences has enabled me to travel to Lijiang (Li Chiang) in southwest China, the earthly paradise in Pound’s final Cantos. “Canto 112” has been found to precisely describe the natural beauty of the Lung Wang’s pool (Jade Dragon God pool), now known as the Black Dragon pool, at the foot of Hsiang Shan or the Elephant Hill:

By the pomegranate water,

in the clear air

The firm voice amid pine wood,

many springs are at the foot of

By the temple pool, Lung Wang's

Hsiang Shan or Xiang Shan is indeed in the shape of an elephant. 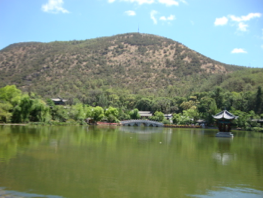 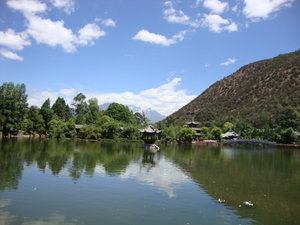 Photos by May Wang

Nowhere in China is the air so blue or the water so green, vividly reflecting the trees, the bushes, the pavilions, and the hill. Half a century has passed since Pound imagined Lijiang as an earthly paradise in southwest China, and yet, amazingly, the air over Lijiang remains as limpid and the water that runs through it remains as translucent.

The Lung Wang’s Pool or the Black Dragon Pool at the northern outskirts of the Lijiang Old Town, a World Heritage Site, is now a public park attracting large crowds of tourists all the year round. 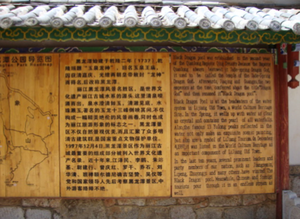 As a plaque at the entrance indicates, the pool “established in the second year of the Qianlong Emperor Qing dynasty (1737)” is “the water-head of the water system in Lijiang Old Town, a World Cultural Heritage Site.” In spring, “it wells up with water as clear as crystal and contains the pearl of all waterfalls.”

Standing by the pool one can see behind the Elephant Hill (as from Photo #2) the Jade Dragon Snow Range of Canto 101:

With the sun and moon on her shoulders,

the star-discs sewn on her coat

at Li Chiang, the snow range,

Where did Pound learn that a Naxi (Na-khi) woman wore a sheepskin cape with seven round discs representing the Pleiades cluster? In Rock’s The Ancient Na-Khi Kingdom in Southwest China, there is a photograph of three Naxi women, one of them “with the sun and moon on her shoulders / the star-discs sewn on her coat.” Its caption offers no clue whatsoever to the large discs on her shoulders as the sun and moon or the smaller discs on her back as stars. 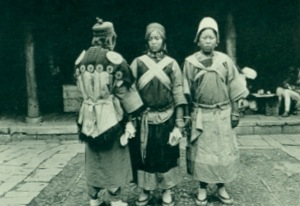 Amazingly, Naxi women still wear costumes with seven “star-discs,” expressive of their desire to be one with nature. 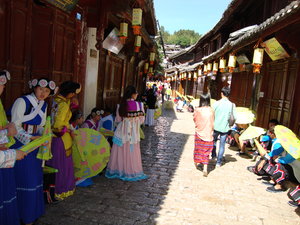 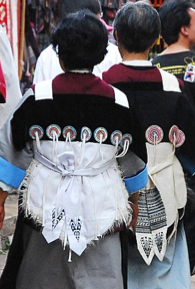 A close reading of the text reveals “Canto CXI” as a poem representing Pound’s visualized ecocriticism. Here the poet not only admires the natural and environmental beauty of an earthly paradise, but also expresses his views on the prerequisite for the ultimate realization of harmony between humanity and nature. Lijiang, 2400-5596 meters above the sea, is claimed to be closer to the sky than most other places in the world. The Naxi language, a living pictographic language, is claimed to be closer to nature than most other languages.

Surprisingly, “Canto CXII’s” last three lines involve Naxi both pictographically and phonetically. The Naxi word for “fate’s tray” is depicted as a sieve and pronounced mu. The Naxi word for the moon is depicted as a crescent moon and pronounced lei. So there is near rhyme acrossEnglish and Naxi (“lei” for the moon with “fate’s tray”) as well as alliteration (“luna lei”) across Latin and Naxi. For Pound, poetic language should be “charged with meaning to the utmost possible degree” (LE 3); and a poet should “fill his mind with thefinest cadences he can discover, preferably in a foreign language” (5). By rhyming across Latin and Naxi he seems to have brought together Venice, the earthly paradise in early Cantos, and Lijiang, the paradise in late Cantos.

Try to imagine Pound’s amazement at finding a living pictographic language in the last decade of his life. The Naxi pictographs were at the brink of extinction during and shortly after China’s “Cultural Revolution” of 1966-1976 when they were rescued by the Lijiang local government by requiring that they be taught along with Chinese at all primary schools in the region. Those who plan to visit Lijiang should also go to the Beisha Mural of Naxi Pictographs (created in the 15th-17thcenturies) at the foot of the Jade Dragon Snow Mountain. 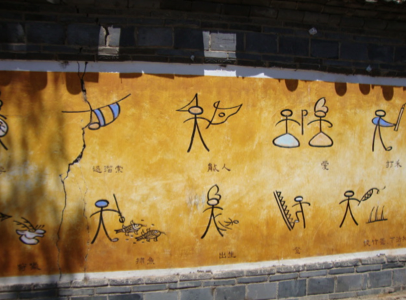 As is shown in the photo taken at Beisha, the four pictographs above respectively represent chain bridge, hunter, love, and beat grain. And the five pictographs below signify to hunt, to go fishing, to be born, to mount, and to lay bamboo spikes.