Out of the depths the Party said would

save the faithful, I rolled on thunder

toward the light of Leningrad

amid a forest of silent

colonels in their perfect

uniforms. How long it took us

to reach the top!  Then my Cold War nightmares

stepped toward the green shacks bejeweled

and it was not Leningrad,

but Petersburg, and they fanned out

toward the cans marked "Gin"

in the March glare of a rare clear sky. "Pardon,"

said the one I'd blocked, and the world


SEVEN YEARS AFTER THE FALL

JUST OUT OF THE TAXI FROM THE TERMINAL

The Neva’s a snowfield.

Headline: a bombing in Jerusalem

near the main bus station. The poet Brodsky,

My brain’s a kind of slush, so it takes me

awhile to get that: a Jew.

in the gloved hands of a young surgeon.

The O.R.’s light is this

I’ve got a pocket full

of rubles, and the Metro stations

are named for poets. Still,

the ruble’s nearly worthless, and the city’s a

The golden spike of the Admiralty middlefingers

write a single Russian stanza, but

I sure wish I had Gogol’s overcoat.

And yours, too, buddy. I’d even wear Anna’s

full-length fur, the blond one she claims

The place is holding its breath. White colonnades

at attention inspect the pants properly tucked into my boots.

Black smokestacks close in from the suburbs,

the Devil’s troops coming to mock, then annihilate

this classicism. Rumor has it

the warehouses on the hooped horizon

are crammed with nukes shipped here for dismantling

after the fall of the USSR.

When mild, bald men put on

their fur hats they become beasts,

intimidating, some even demonic.

Hatless, they are affable, childlike, courteous.

When you photograph people—when you ask

not convincingly, and then you snap them and they say,

on your right, on your left

through the archway, then left into

the courtyard, the door

We are so sorry for the smell. Here,

the hallway is part of the street,

When I got to Finland Station,

One thousand rubles were the same

as twenty cents. The Venice of the north

was frozen, even the Russians

said it was cold. Natalia stifled a laugh

when I fell on the ice, but she fell, too,

On a tiny, listing bus,

we tour St. Petersburg, but the windows

frost and blurs pass behind a scrim. The guide

Englishes a mush of syllables. Then we eat beets,

I wake from dreamless sleep

in a freezing room. Out the window, far below: Desolation

of hardpacked snow. A bulky man

leads a boy by the hand

from nowhere to nowhere. Or maybe a girl.

They have no faces. 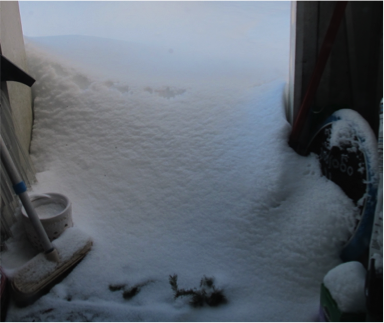