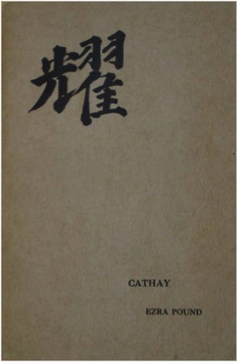 First published in 1915, Cathay, Ezra Pound’s early monumental work, originally contained fourteen translations from the Chinese and a translation of the Anglo-Saxon poem “The Seafarer.” In 1916, Cathay was reprinted in Pound’s book Lustra without “The Seafarer” and with four more Chinese poems.

Cathay was greatly indebted to the notes of Ernest Fenollosa, a Harvard-trained scholar. “In Fenollosa’s Chinese poetry materials,” the noted scholar Zhaoming Qian writes, “Pound discovered a new model that at once mirrored and challenged his developing poetics.”

This centennial edition reproduces the text of the original publication along with the added poems from Lustra and transcripts of the relevant Fenollosa notes and Chinese texts. Also included is a new foreword by Ezra Pound’s daughter Mary de Rachewiltz, rich with fascinating background material on this essential work of Pound’s oeuvre.

Find it on Amazon here 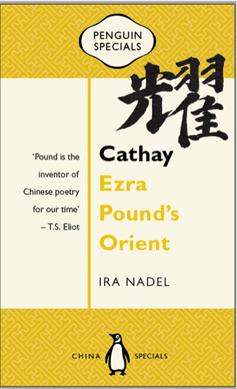 Cathay: Ezra Pound’s Orient analyzes the origin of Pound’s interest in Chinese and Japanese art and literature. Identifying the early influences on his Oriental perspective, originating in Philadelphia and then London, it details his encounters with Laurence Binyon, Arthur Waley and Mary Fenollosa as he worked through the manuscript materials of Ernest Fenollosa, refashioning awkward “decipherings” into elegant poems. The importance of Noh, as well as the Chinese ideogram, also form a portion of the study. Finally, the book considers the poetics of Cathay and its impact on both Pound’s contemporaries and successors. The text includes the fourteen poems that comprise the first edition of Cathay celebrating its centenary in 2015.

I. Pound and the Invention of China 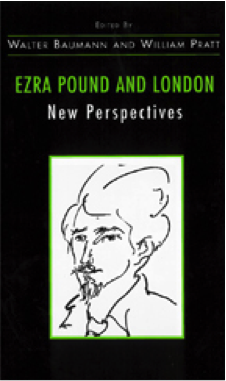 In 1908 Pound arrived in London with his first book of poetry, A Lume Spento, in hand and would go on to start a revolution in English letters. By the time he left in 1920, he had taken on the role of chief apostle of Modernism in literature. A little more than a century later, in 2011, scholars gathered to celebrate his life and work at the The Ezra Pound International Conference in London. Ezra Pound and London: New Perspectives collects a selection of the insightful, thorough, and thought-provoking papers given at the conference.

The essays cover a broad range of topics, including biographical accounts of Pound through the recollections of his daughter, Mary de Rachewiltz, and his nephew, the late Peter Rudge, considerations of the place of London in The Cantos, discussions of Pound’s connections to other writers, re-examinations of Pound’s reading of the classics and of the influence of the fine arts on his aesthetic vision, and reflections on Pound’s early political views.

II. LONDON IN THE CANTOS

Gavin Selerie, “‘And now why’: London Ghosts and their Haunts”

III. POUND AND OTHER WRITERS

Diana Collecott, “‘The women of 1914’: Women’s Networks in Literary London during World War One”

IV. POUND AND THE CLASSICS

V. POUND AND THE FINE ARTS

Ira B. Nadel, “Picasso and Pound”

Roxana Preda, “‘A Broken Bundle of Mirrors’: An Exploration of Pound’s Vorticist Portraiture” 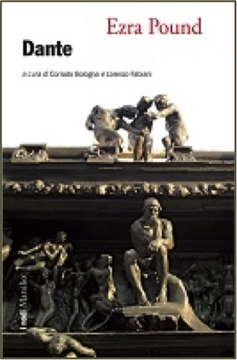 Dante is the great ‘discovery’ of the twentieth century. Before anyone else it was the great poets (Pound, Eliot, Mandelstam, Borges) who understood, reimagined, and even ‘rewrote’ him. In this book we go back and listen to the authentic voice of the first among all, and the teacher of all, Ezra Pound, whom Eliot defined with a Dantean formula, “il miglior fabbro.” Originally prepared by Vanni Scheiwiller to celebrate the poet’s eightieth birthday, the book has since remained only an “editorial dream.” Today, released from half a century of silence, it comes to life, offering the still-intact wonder of a decisive critical and poetical thought. “A book by Ezra Pound on Dante,” we read in the introduction to the volume, “is a treasure-trove of ideas and perspectives on poetry. […] Pound surprises us, because he seems to have anticipated what we now think about Dante: and instead, what we now think is often born amidst his ideas, and has flown towards us along hidden, suddenly emerging rivulets, in a thick and dispersive language that this book, ultimately, works to unify.”

Da Lo Spirito Romanzo(1910) [From The Spirit of Romance]

* See the English translation of this article by Claudio Sansone in the current number of MIN. 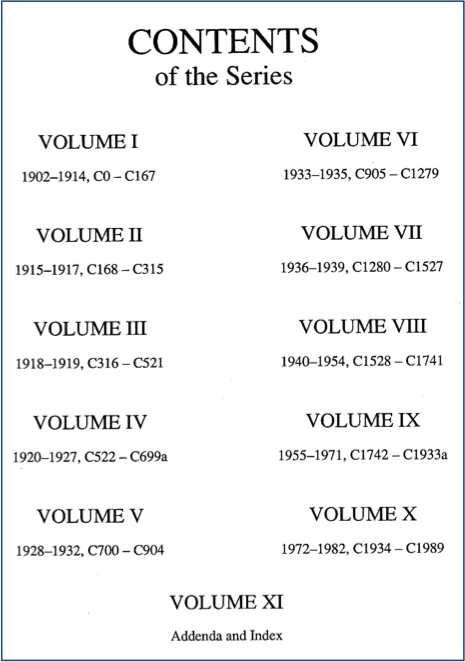 The monumental facsimile work of reference Ezra Pound's Poetry and Prose: Contributions to Periodicals (P&P), 11 vols., edited by Lea Baechler, A. Walton Litz and James Longenbach is the most reliable and comprehensive work of reference published to date, documenting the running story of Pound's periodical publications in time. As a printed resource, it is invaluable to researchers. However, due to a very small print run and high prices, these volumes have become very hard to access and consult. In the UK for example, there are only five sets available. If a volume is requested through interlibrary loan, it cannot be borrowed and has to be consulted on site in a special collections reading room.

Digitizing these volumes would greatly improve the possibilities of access and reference for scholars all over the world.

Preliminary negotiations with New Directions as to permission to scan this reference work for closed access (for members of the society) were started in January 2014. A more elaborate application for copyright was made in May 2015. Permision for digitizing the volumes was given on June 22, 2015.

The project was announced at the Brunnenburg Conference on 11 July.

Please log in and go here to check progress. 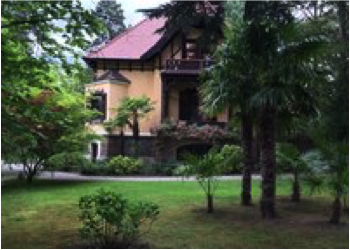 Earlier this year the Ezra Pound Research Center – Ezra Pound and his Contemporaries (EPRC) began its activities and launched its first initiatives. As indicated by its name, the EPRC, while focusing on the research of Pound’s literary work with the aim of fostering the critical understanding of his oeuvre, extends its scope to the exploration of the context of that oeuvre.

The EPRC is hosted by the Academy of German-Italian Studies located in the city of Merano at the foot of Brunnenburg, where Pound lived for four years with the family of his daughter Mary de Rachewiltz after his release from St. Elizabeths Hospital in July 1958. Founded in 1959 with the aim of promoting the cultural and scientific exchange between the German- and the Italian-speaking world, the Academy of German-Italian Studies is an institution for research and higher education in the humanities, with a focus on philosophy, literature, and art. The Academy carries out in-house and collaborative research and organizes conferences, symposia, doctoral colloquia as well as lectures, concerts and exhibitions. Because of its location and its scientific orientation, the Academy is an ideal institution for harboring the EPRC. 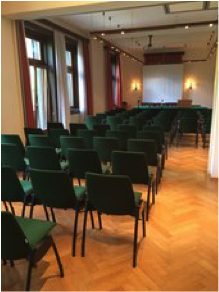 The future plans of the Center are manifold and ambitious. These plans include digitalization, cataloguing, archiving as well as editorial projects that make the poet’s
literary legacy available and complement the corpus of already existing text-critical editions and translations, especially those into German and Italian. In addition to this, the EPRC will initiate and take part in research projects directly linked to the poet’s literary work and its context. Though the EPRC does not provide scholarships or research fellowships, it can offer workspace and some logistic support, as well as a temporary affiliation, to scholars who wish to spend some time in Merano in close vicinity to Brunnenburg and Pound’s working library. Further initiatives of the EPRC include readings, colloquia, workshops and conferences. Through these activities the Center wishes to serve as an international collaboration forum for Pound scholars and as a training center for young researchers working on Pound and his contemporaries. At the same time, the EPRC conceives itself as part of an international network of scientific institutions devoted to Poundʼs work and is happy to establish links and collaborations with these.

The Center, which was founded under the auspices of Mary de Rachewiltz and her son Siegfried, operates under the direction of Ralf Lüfter (U of Bolzano) and can count on a prestigious scientific advisory board formed by Massimo Bacigalupo (U of Genoa), A. David Moody (U of York), Siegfried de Rachewiltz (International Study Center Brunnenburg) and Richard Sieburth (New York U).

Further information about past and future activities of the EPRC is available here. 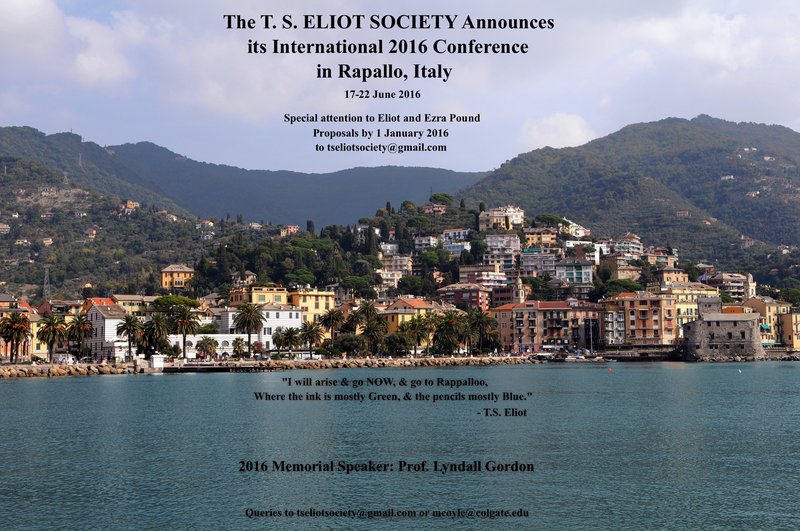 Pound scholars are special guests at this event organized by our colleagues of the T. S. Eliot Society.

or organize a panel .