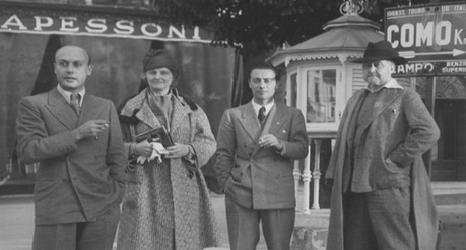 Maurizio Pasquero has put together an important resource and his care for detail makes it a valuable tool for Poundians interested in placing letters and articles from 1937-38 in a wider context. The explicit aim of his study was to “fill a gap” in the journalistic exchanges Pound was involved in with regard to the publication of Broletto and its Pound-fuelled insert “Servizio di Comunicazioni” (7). The objective of the latter was to bring news of lesser known authors and books to Italy—specifically books that the commercial mass media had ignored or side-lined, and that Pound and his colleagues believed possessed “permanent merit” (26).

Pasquero achieves this aim by providing readers with a full picture of Pound’s relations with Carlo Linati and Carlo Peroni, the founder and volunteering director of “Broletto” throughout its brief but turbulent existence. “Broletto” was founded with the intent to provide a cultural forum in the area of Lake Como, to create a “real” review that would include articles on tourism, culture, art and nature. In a way, it was born out of the literary salon that Peroni and his wife held in their living room throughout the twenties, but the collapse of a number of other regional reviews (and the flailing, overly commercialised feel of the transatlantic ones) helped carve a space for a local newspaper that managed to make a name for itself even abroad. Its funding was to run short much too early, and Peroni’s moving letter to Pound expressing his sadness is a testament to the weight of what they felt they had created. The letter begins starkly, “Broletto has died” (45). The magazine had started in 1935, was suspended in 1936 but recovered in 1937-1938. While its print run began at fifteen-hundred (and was pushed down to one-thousand) it managed to make a name for itself in literary circles abroad by the time its funding was cut, and this was mainly due to the ten instalments of the “Servizio di Comunicazioni” that were published in its final years.

For the first time, Pound scholars can read the existing Pound/Peroni letters in their entirety, well-edited and presented with a number of carbon-copies and facsimiles that help give a sense of the aesthetic dimension to the newspaper’s official communications. In addition to these letters, Pasquero has included and cited other letters (some already published) to and from Linati, Carlo Izzo and some other contributors to the newspaper. Of note to the scholar are the few letters that contain Pound’s reading lists of crucial authors, which make reference to the works of T. S. Eliot, William Carlos Williams, and to Pound himself—but also to a number of British periodicals such as the Criterion and the British Union Quarterly, and to the many authors who published in these periodicals that Pound respected, wanting to see their names publicized in Italy.

The rest of the volume reprints the key articles of the “Servizio di comunicazioni,” the title which Pound translated literally but ambiguously (in the English advertisement for the insert) as “Communications Service” (26). But the first piece by Pound in this volume preceded the founding of the insert, and was indeed written some twenty years before—it is the short story “Jodindranath Mawhwor’s Occupation”(included in Pavannes & Divisions in 1918). An article could be devoted to the differences between Nina Ruffini’s Italian text made available here, and the English version that is better known.

Of the other articles reprinted here (cf. contents page below for a full roster), most of which were commissioned or suggested by Pound for publication, Olga Rudge’s “Il processo microfotografico nello studio della musica inedita” (“The process of microphotography in the study of unpublished music”) stands out. First, because it holds an important position in the first edition of the “Communications Service” in January of 1938 (the same month in which Rudge published “Music as Process” in the Townsman). Secondly, since it gives insight into the genesis of Rudge’s interest in a method of research that was to lead to her indirect “saving” of a number of Vivaldi manuscripts that would otherwise have been overlooked.

Pound’s three personal contributions to the “Communications Service” are varied. His first piece, published in April 1938, was titled “Significato di Leo Frobenius” (“The Significance of Leo Frobenius,”), and has been republished a number of times since in Italian. His second, dated October 1938, was simply titled “Binyon,” and analysed Laurence Binyon’s translation of Dante’s Purgatorio, praising it highly just a month after Pound had underscored the importance of serviceable editions of Dante in an article entitled “Purgatory” for The New English Weekly. This article was republished in Cesari’s 2005 edition of Pound’s Italian Papers (cf. OBIPS 2000-2014). Pound’s third contribution is an idiosyncratic set of literary and political chapters and proposals (some only a few lines long) called “Orientamenti” (‘Orientations’) and came out in the December of 1938 (and was also reprinted in Cesari 2005). These articles are also reproduced in P&P VII: 314, 372, 397. I have translated all three for this issue of MIN and I refer the interested reader directly to those texts to learn more about them—they are all very brief, and summaries would be redundant.

This is the full contents page of the book, including all the articles of the “Communications Service,” the titles of which I have also reproduced in translation.