In a perceptive review of the recently released Dante by Ezra Pound, edited by Corrado Bologna and Lorenzo Fabiano (Marsilio, 2015), Adriano Scianca praises the appearance of the long-planned collection of Pound’s essays on Dante and his contemporaries and immediate predecessors and their translation into Italian. Writing in the independent newspaper Libero Pensiero for June 5, 2015, he notes Pound’s deep and abiding love for the Tuscan poet and his “curious dislike of Florence, ‘the most damnable Italian city where there is neither a place to sit down, to stand, or to walk.’”

Though praising the editors’ work in general, Scianca deplores their opening “ritualistic exorcism in which they condemn the ‘extremist utopias’ relating to the economic ideas of the poet, not to mention the fact that he fell into the trap of ‘a very foolish ideology.’ This cathartic passage seems by now almost unavoidable for anyone who wishes to approach Pound without awakening suspicion of political incorrectness.”

In my work I have taken pains to show that conventional categories of left and right are too simplistic to describe the nuances of Pound’s work, particularly as his views and ideas changed and evolved over sixty years. Further, current canons of political correctness, as enshrined in academia under a rubric that might be called “oppression studies,” offer reductionist labels for an immensely complicated body of poetry and prose.

Further, I have tried to demonstrate that Pound’s economic ideas were largely correct. He was associated with a group of radical economists in the 1920s and 1930s who argued that the world’s increasingly desperate economic woes were due largely to underconsumption caused by inadequate monetization. I am currently working on an essay for Ralf Lüfter’s and Roxana Preda’s Companion to Pound’s Economics. In it, I argue that Pound’s idea of usura is largely encompassed by what contemporary economists call “rent-seeking.” “Rent-seeking” is the use of political and economic power to command excessive profits at a cost to society in diminished productivity and innovation. Economists both on the right and the left now believe that it caused the Great Recession of 2008. It might be described as the excessive and speculative over-monetization of a society: Canto 45 “N.B. Usury: A charge for the use of purchasing power levied without regard to production; often without regard to the possibilities of production. (Hence [what follows is my rewrite] the near failure of New York banks and the failure or near-failure of Wall Street investment houses.) Think credit default swaps, excessive mortgage valuations, and derivatives. Pound was right.

I have chosen the books for this exhibit to encourage a nuanced and inductive understanding of the wide range of Pound’s reading and thinking, and to caution against deductive and reductive approaches albeit well intentioned.

Books in the left display case:
back (closest to wall) left to right 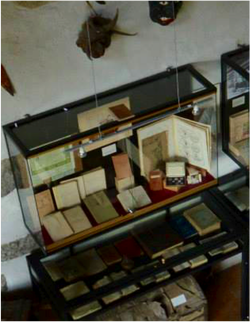 Negro Anthology “made by Nancy Cunard 1931-1933” (London: Wishart & Co, 1934). “Dedicated to Henry Crowder my first Negro friend.” Inscribed: “Dear Ezra, Monumentally, I think we will call it, and with love Nancy.” The one-page prospectus glued in the inside front cover states: “on Africa and the question of Color in the U.S.A. and in Europe.”

Il Capitale Critica Della Economia Politica by Carlo Marx (Torino: Unione Tipografico-Editrice Torinese, 1924) inscribed “for Mary and Brunnenburg, Summer 77 Tim Redman.” This is the edition Pound read but not his copy, which is at the Harry Ransom Center at the University of Texas at Austin and is heavily marked.

Books in the left display case:
front from left to right

Rights of Man: Being an Answer to Mr. Burke’s Attack on the French Revolution by Thomas Paine (London: J.M. Dent & Sons Ltd., 1921).

Ten Days that Shook the World by John Reed with an Introduction by Nikolai Lenin (New York: International Publishers, 1926).

Books in the right display case:
back (closest to wall) left to right 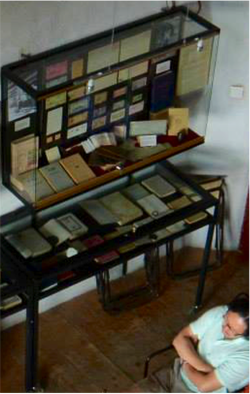 Books in the right display case:
front from left to right

After Strange Gods: A Primer of Modern Heresy by T.S. Eliot. The Page-Barbour Lectures at the University of Virginia 1933. (London: Faber and Faber Limited, 1934).

Prufrock and Other Observations by T.S. Eliot (London: The Egoist Ltd., 1917).

The Wild Swans at Coole, Other Verses and a Play in Verse by William Butler Yeats (Churchdown Dundrum: The Cuala Press, 1917).

No Thanks by E.E. Cummings (New Rochelle, NY: The Golden Eagle Press, 1935). Copy 4, inscribed “for Ezra Pound whose attempted portrait is 56 E.E. Cummings.” That poem begins “this mind made war / being generous.” Pound wrote to Cummings on April 28, 1935: “damn it all, 56 worth more than the prix nobel” from Barry Ahearn’s edition of the Pound/Cummings correspondence. 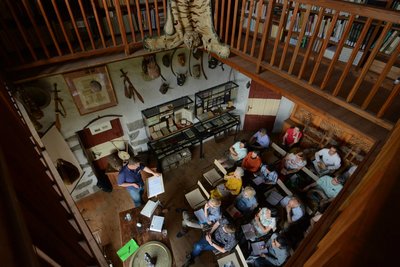